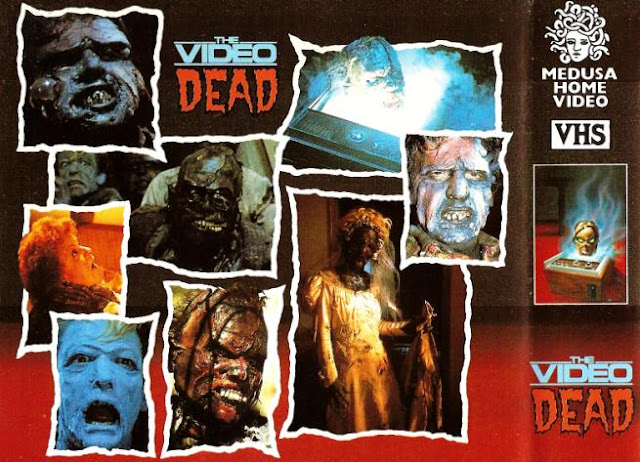 What better way to scare the MTV generation than to make a movie where zombies come out of the TV?  Well, I can tell you, there are probably a million better ways, and can also tell you that this movie is probably pretty bad.  But, it’s not important what I think.  It’s only important what Starkwell and Lovelock think.

[Delivery men deliver a guy a huge crate that he never even ordered.]

[Crate has a TV in it, he turns it on, it shows a fake zombie film.]

Starkwell: That zombie film looks more interesting than the actual zombie film that we are watching.

Lovelock: Dude, we’re one minute in… give it a chance.

[Zombie rises out of the TV.]

Lovelock: I think if he had turned on the TV and it was showing pornography, this would be a whole other movie.

[Delivery men come back, they had the wrong address.]

Starkwell: If a crate is destined for the Institute for the Occult, you would think that they wouldn’t accidentally deliver it to a residential neighborhood...

Lovelock: Right, because an Institute that is receiving an evil television set that communicates with another dimension would definitely be on the same route as this old crotchety guy`s house.

Starkwell: They probably ordered it off of Amazon.

[We are introduced to the main character girl.]

Starkwell: Of course she is going to major in Aerobics and minor in Music Video.  Fucking eighties.

Lovelock: The soundtrack is TOTALLY RADICAL.

There was an odd exchange between Jeff and Neighbor Girl, wherein she says her poodle runs into the woods, tries to mate with skunks, and then gets more turned on when they spray him.  Lovelock and Starkwell both just sat there dumbfounded.

[Jeff rolls a joint, smokes it, and a naked woman comes out of the TV set, she goes back into the set, and then Jeff has a conversation with some old crusty white dude.]

Lovelock: That’s why I pass on grass.

[Zombie hand grabs Jeff through the TV, he chops it with a hatchet, gets blood all over himself.]

There was a whole slow moving sequence showing zombies walking around the house, eventually turning on the blender, and then laughing.  Lovelock said something like “Laughing zombies? Fuck you.”

Starkwell: How the hell did that zombie get into the washing machine?

Lovelock: Explanations aren't needed in a montage... Look, that one zombie is wearing the old man’s glasses! Silly zombie.

Starkwell: So wait, to kill them, you have to attack them, as if they were alive, let them think they are dead, and leave them out in the woods to decompose over time.  Once decomposed, then they are actually dead?

Lovelock: Or, trap them in a room, and they eat themselves.

Starkwell: I guess the writer wanted to try something different than just shoot the brain.

Lovelock: Tried and failed.  I don’t think I’ve ever been this confused ever.

Starkwell: Also, if that’s true, and a little arrow to the chest can make them stop and think they are dying, why wouldn’t the IRON TO THE HEAD have killed the zombie earlier in the film?

Starkwell: Wait, so, arrow to the side, dead.  Iron to the head AND shotgun shot to the leg at point blank range… not dead?

Lovelock: How fucking stoned was the guy who wrote this?

Starkwell: How stoned were the people that gave this turd the green light?

[Jeff runs into the bear trap he set up.]

Starkwell: He has the whole forest to run through and he steps in the one tiny bear trap that he set up?

Lovelock: Dude deserves to die as far as I’m concerned.

[Jeff chops off zombie head and simultaneously takes a chainsaw to the chest.]

Lovelock: This movie ain’t so bad I guess.

[She traps them in a room, they start melting.]

Starkwell: Wait, I thought when trapped they would eat themselves.

Lovelock: It’s not an exact science.

Then the TV says THE END for the in-the-TV fake movie.  The girl goes insane, and when her incredibly old parents go to visit her, what do they bring her in the hospital?  The TV.  Of course the TV.  You know, there are a lot of people that were involved with this film, the actors, the writer-director, etc. that have never been involved in any other movie, ever.  I think I know why.