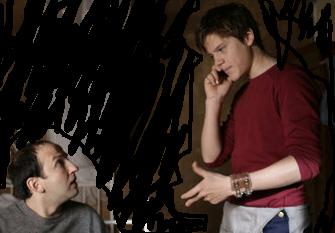 “Rammbock” or “Berlin Undead” is a somewhat recent German zombie film that features fast zombies and a strangely short running time, clocking in at about an hour.  Maybe this was a TV movie or something, but, thanks to Netflix, Lovelock and Starkwell get to have at it.  It’s in German, with English subtitles, so naturally Lovelock is already entering the film annoyed.

[Dude goes to find his ex and plead his case, instead finds a rabid crazy man.]

Starkwell: I guess with the short runtime, they have no choice.

Lovelock: I kind of already dig the main character.

The outbreak spreads very quickly, as the main character and the young repairman he is stuck in the apartment witness people in the street being eaten.  Amazing.

[Michael yells at kid, kid tells him his breath stinks.]

Starkwell: Honestly, telling someone that they have bad breath is the best way to immediately boot them right off of their high horse.

Lovelock and Starkwell stayed mostly quiet for a while, although they laughed for a few minutes when main character Michael slept in a bear costume, for warmth.

[Michael finds his ex, she’s already been banging some dude, he’s on the roof.]

Lovelock: The roof is probably the worst place to be when in a fit of depression.

Starkwell: I can’t believe he just left the kid behind.  DUDE!  Go get the kid.

[Kid figures out that flashes hurt them, herds the zombies out the front gate.]

The movie has a semi-depressing ending, but hey, at least the kid makes it.
Documented by Kev D. and Posted at 09:07