Gangs of the Dead. 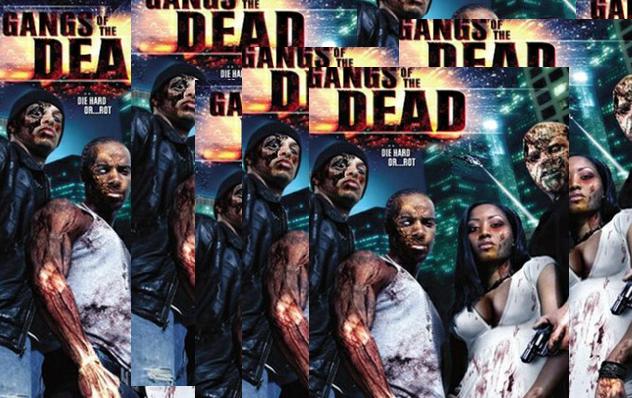 Meteor crashes and turns dead homeless people into infected zombies.  Meanwhile two gangs fightin’ for the streets get caught in the middle.  There are so many ways that this can go dreadfully wrong.  I’m hoping Starkwell and Lovelock lose count.  What’s especially weird is that the guy who wrote and directed this thing seems to only have ever worked on video games both before and after this movie.  It starts and we’re introduced to a variety of Los Anglesians.  Ten minutes in and Lovelock and Starkwell still haven’t left, so that’s something.

[Random shots of L.A., with like music playing and shit.]

Lovelock: We’ve watched fifteen minutes of film, and I honestly feel like hey could have cut out ten minutes of it.

Starkwell: I was thinking fifteen out of fifteen.

[Latino crew shows up early to a crime meeting, after mixing up AM and PM.]

Starkwell: Wait, it's nine in the morning?  They've been driving around for like two hours!  Are we supposed to believe that those gangsta dudes were all up and hanging around at like seven in the morning?

Lovelock: I don’t think the movie really cares what you believe.

Starkwell: Also, why are they surprised that the other gang is already there?  Didn’t they see the girl in the car parked RIGHT NEXT TO THEIR CARS!?!?!?  Didn't they see the other car altogether?

Lovelock: I just love that NOT ONLY is there some kind of sketchy arms deal happening at nine in the morning, but that these guys are mixing up AM/PM, like they’re setting an alarm to get up and go the gym, or to the office

Starkwell: I would have thought one of the main attractions towards a life of crime is being able to sleep in.

Then the Homeless people attack the cops and an outbreak ensues.  Lovelock was like “alright, now we’re getting somewhere.”

[Weatherman’s Girlfriend tries to give Squeegee Bum a buck and then the Bums rip her apart and eat her.]

Lovelock: And that’s why I never give money to the homeless.

One of the two main cops is the nerdiest looking guy ever.  Starkwell said “It wouldn’t surprise me if he’s actually a software engineer that has worked on some of the director’s video games, and he owed him a favor.”

[Latinos jump into a dumpster, surrounded by zombie-bums.]

Lovelock: It’s time to take out the trash!

Starkwell: Yeah but what... you mean the zombies would say that?

Lovelock: I don't know... but somebody should have said it.

Honestly some of what’s here isn’t bad, and Starkwell and Lovelock seem somewhat into it… it’s just that there is SO MUCH filler.  For starters, so many of the characters are unnecessary, especially since they end up dying before they are developed anyways.   And then Weatherman throws a grenade into room that had many grenades in it.  The explosion is tiny, and somehow the others don’t blow up.  I think wat Starkwell said was “Man, Fuck you.”

[Weatherman somehow knows what has caused all of this.]

Starkwell: When society collapses, we must all turn to… the weather man for wisdom?

Lovelock: That’s probably the least believable thing in this movie.  Meteorologists are wrong about the weather nine times out of ten, and that’s their job… and we’re supposed to believe that he could figure this out.  Weak.

[Zombie Weatherman is shot in the head.]

Starkwell: And the award for most redundantly useless character in the movie goes to…

Lovelock: The zombies kind of look like 'The Hulk' looked in that old TV Show with Bill Bixby.

Anyways, more people die, some because of gang-fighting, some because of zombies.  As the movie went, the dialogue kept getting worse and as Lovelock said “holy shit this shit is dragging on forever and shit.”  That sums it up very well.  “Night of the Comet” this is not.  Nor is it “C.H.U.D.”
Documented by Kev D. and Posted at 19:10