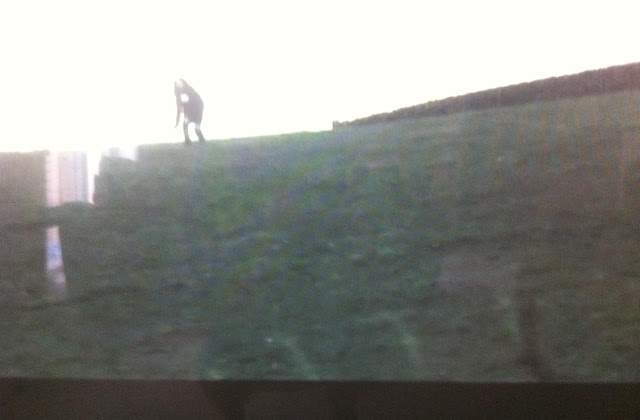 While it has more in common with “The Crazies” or “The Grapes of Death” than it does with the typical zombie fare, Scotland’s “The Dead Outside” got pretty solid reviews from random film festivals… or so the box tells us.  Since we learned long ago that you can’t judge a film by its BOX, we will have to let Starkwell and Lovelock talk it out.  And… PLAY.

Lovelock: Yeah, hauling up in a creepy abandoned farmhouse during an outbreak… that’s ALWAYS a good idea.

Starkwell: Well it’s a good idea from the standpoint of the director wanting to make the film creepy.

We get a little bit of insight into what is going on.  We know there is a vaccine and we know it doesn’t work… The movie has a pretty slow pace, but the soundtrack is good, the acting seems perfectly adequate, and the director does a fairly decent job in making Lovelock “almost shit my pants” once or twice.

The flashback scene and strange editing made it hard to figure out exactly what the hell happened, or what the hell is going on.  But as Starkwell said “I think that’s the point.  Don’t you feel nervous and on edge?  GOOD.  You’re supposed to.”

[April seems to be immune.]

Lovelock: Why does she have blood all over her face?

Starkwell: Is she immune, or is she ONE OF THEM!??!

Starkwell: Maybe he’s one of them…

It’s not often that a film can make both Lovelock and Starkwell paranoid.  The movie oozed forward with a minimal yet speaker bustingly loud film score and nervous farts aplenty from the peanut gallery.

Starkwell: It only takes one scary movie to make all music boxes scary forever.

Lovelock: April don’t seem like a girl you should be betraying… EVER.  Daniel sucks.

Then we get the whole back story on April.  Starkwell and Lovelock were both literally on the edge of their seats.  It’s clear that April is a very broken young girl.

[KATE IS EVIL! She kidnaps April and takes off in car.]

Lovelock: Stupid Daniel, I hate him.  I hope he makes up for this by killing Kate.

Starkwell: The dead outside?  More like the bitch inside.

[Kate almost immediately runs the car into a tree.]

Lovelock: Evil and a shitty driver? Nice.  Well at least the crazies will get her now and, hopefully bludgeon her to death with a rock.

Eventually, April stabs Kate directly in the heart.  Lovelock stands up and plays an air guitar solo.  Daniel goes back to his home to kill his infected kid.  The guitar solo stops, and the movie ends.  Starkwell was in love.
Documented by Kev D. and Posted at 22:30