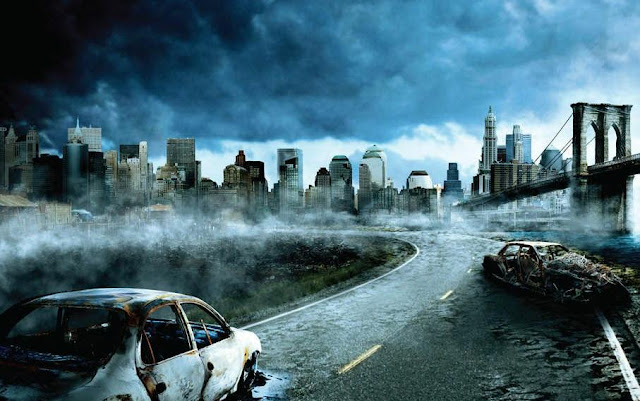 I haven’t really heard much about “Autumn”.  I think it’s a Canadian film based on a novel by David Moody.  I know it’s about a virus that wipes out the most of the population, who then eventually RISE!!!  The movie starts immediately showing a montage of people coughing up blood and dying, and some people surviving the apparent FLASH plague.

[We are introduced to some survivors.  People somehow immune to this.]

Lovelock: They seem to be taking this rather well.  I would have probably pooped and peed my pants while vomiting at the same time.  And screaming.  And crying.

Starkwell: I don’t think that would look very good on film.

What is it with these low-budget movies using bad songs for the soundtrack and basically having whole sequences that look like bad and boring music videos?  Not my question, it was Starkwell’s… I just paraphrased since his version contained many curse words.

Starkwell: The two British actors make the Canadian actors seem even worse at acting than they actually are.

Lovelock: True… but I don’t think that they needed any help.

Considering that the film’s runtime clocks in at a little less than two hours, both Lovelock and Starkwell are concerned, given the snail’s pace that we are currently oozing at.

Lovelock: He’s going outside for a smoke?  Oh those polite Canadians…

Starkwell: How come all of the planes didn’t come crashing down when the virus exploded?  And if the people in said planes didn’t get hit by it, why haven’t the planes landed and the airports been flooded with people looking for answers?

Lovelock: Enough of your ‘what if this really happened’ stuff.  Focus on the movie.

[The bodies get up and start walking around.]

Lovelock: That’s what I’m talking about!

Starkwell: You were just talking about corpses getting up?

Lovelock: Well… no… but… FUCK YOU.  You know what I mean.

Holy shit this film moves slowly.  Both Lovelock and Starkwell can appreciate a deliberate pace, but this is making Jean Rollin films seem fast moving.  Starkwell still thinks that everyone is way too calm and that they seem to be figuring out what is going on way too easily.  It’s like the walking dead don’t even shock them.

[Guy shoots gun at a zombie, zombie ATTACKS HIM!]

Starkwell: Aren’t you the one who always says ‘it doesn’t matter how we get there as long as we get there’?

Lovelock: Yeah, but it shouldn’t have to take this long.

[Guy watches zombies eat a dog, the movie then freezeframes on him holding binoculars.]

Starkwell: The movie isn’t long enough already? They have to pause on certain shots now?

Somewhere around the hour and fifteen minute mark, the movie really starts picking up some steam.  Lovelock and Starkwell were quiet, and extremely focused on the screen.

Lovelock: Is that a “Trailer Park Boys” poster?  Awesome.

Lovelock: If they were going to have a guy whose mom is still alive, it might have made sense not to cast a seventy-five year old as Philip.

Starkwell: This whole scene is a perfect example of something that could have been completely cut from the movie.

Lovelock: Well, it took an hour and forty-five minutes, but we just had our first zombie attack.

Starkwell: For a film that took THAT long to get going, it sure as hell ended abruptly.

A better budget, better acting, better directing, and better pacing and editing could have taken this movie to ‘Almost Zombie Hall’ status.  But then again, if my aunt had balls she’d be my uncle.
Documented by Kev D. and Posted at 12:49