House of the Dead. 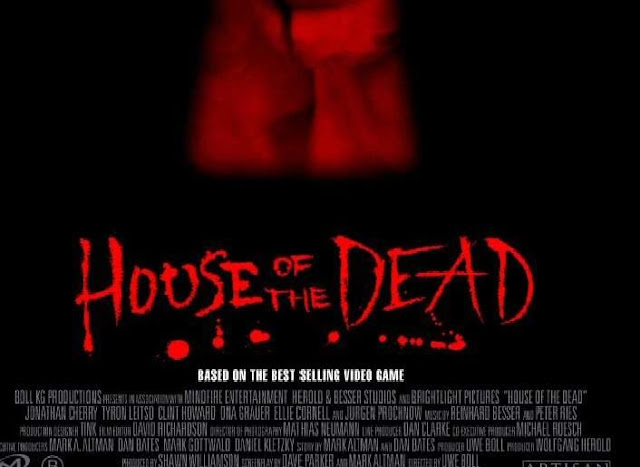 You may be a fan of the original SEGA gun games.  You may be an avid zombie film fan.  You might then think, how could this possibly be bad?  It won’t take long for Uwe Boll to show Starkwell and Lovelock how it could be bad, and also just how bad it can be.  Get ready for a horrible ride.

[Opening credits features mangled up footage from the original game.]

Lovelock: It’s almost as if Boll is asking us, “wouldn’t you rather be playing the game?”

Starkwell: I have a feeling that soon I will realize that there are a lot of things I’d rather be doing right now.

Then they showed the lamest “rave” ever, and some of the lamest “college aged kids” that I have ever seen.  It turns out the “rave” is on the ISLAND OF THE DEAD.  There have already been a few familiar faces that should be ashamed to have been involved with this movie.

Starkwell: So this is going to be one of those movies.

Lovelock: What’s with the random shots of the actual video game?

Starkwell: I assume because otherwise you’d never know what this movie is supposedly based on.

Lovelock: Lesson number one, when showing up to a “rave” on a mysterious island, if the place looks like it was ransacked by Vikings, TURN THE FUCK AROUND.

Starkwell: I think part two of that lesson should be not to have sex in a random abandoned tent.

After some lame newly introduced character compared the "rave" outbreak to Romero movies with an incredibly awkward and out-of-place reference, Starkwell realized that the movie was written by Mark Altman.  Mark Altman is responsible for a lot of bad zombie movies.  Each of them contains scenes of characters talking about other real zombie and horror films, and it NEVER SOUNDS NATURAL.  The dialogue here is no exception.  “What does he think?  Does he think that referencing good movies somehow elevates his own?” exclaimed Starkwell.

Lovelock: Zombies can do front crawl?

Starkwell: They just showed the same zombie die like three or four times in a row.. in slow motion.

Lovelock: Zombies spit acid? Captain Kirk is the ONLY good thing in this movie.

Starkwell: That actor should still be embarrassed.

Starkwell officially voted that the worst line of dialogue was “These are zombies pure and simple.”  But then a minute later Captain Kirk said “Spanish people from Spain” and Lovelock said, “There’s a new sheriff in town.”

Starkwell: It’s not often that you see a director’s choices making a bad script worse.

Starkwell: What the fuck?  You can see the springboard on the ground!  Boll didn’t even bother hiding it.

Lovelock: Is that an example of “complete disregard for the viewing audience” that you are always talking about?

[Group discusses guns that they will use.]

Lovelock: And yet, oddly enough, it feels like he clearly never played “House of the Dead”.

Lovelock: The soundtrack makes an already shit movie, even shittier.

Lovelock: What a waste of a good head explosion shot.

Then Lovelock start looking around him and realized Starkwell had left.  I’m surprised he held on that long.  He left just in time too, because he missed the HIGH SPEED MONTAGE that made Lovelock want to throw stuff at the TV.

Lovelock: Nothing says “time for a make-out session” like “we’re trapped in a spooky house surrounded by zombies”.  FUCK THIS SHIT.

Lovelock: New clumsiest line “Hey look at this book, it looks old, let’s read it, maybe it will help us.”

Starkwell: So, they don’t explain how any of them could possibly know how to use guns, and do martial arts, but, in order to explain why, at the end of the movie, the main girl would be able to battle an ancient Spanish warrior in a sword fight, was by slipping in a mention that she practices fencing.

[She is stabbed between her globes.]

Lovelock: And still, she died.  Wait… she’s up?

Starkwell: She got a sword THROUGH THE HEART.

Lovelock: Also, why are you back?

Starkwell: Forgot my phone.  See ya.

The zombies looked decent enough, but that was the only thing in the film that came close to meeting par.  Piece of shit.  I should also mention that the ending doesn’t make any sense.  But, what did we expect?
Documented by Kev D. and Posted at 21:00