The Grapes of Death. 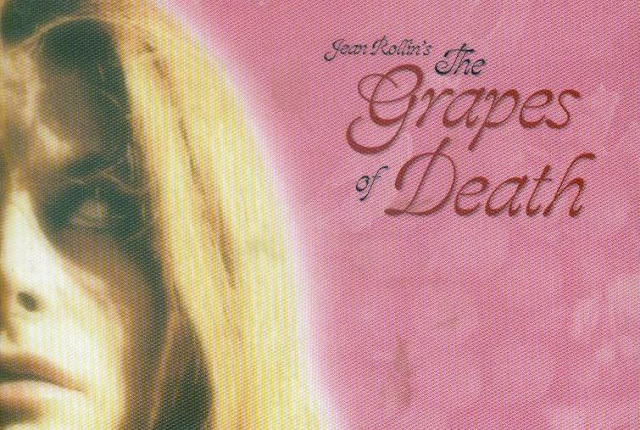 Desperate to find something by Jean Rollin that Starkwell and Lovelock might actually enjoy, I’ve decided to go with “Les Raisins de la Mort”.  Not a traditional flesh-eating zombie based movie, this is still always mentioned when people bring up zombie films from the seventies.  Oddly enough, even though the premise is very similar to that of Romero’s “The Crazies”, people don’t consider Romero's film to be a zombie film.  Even though it was a million years before this.  People are dumb.  Anyways, take “The Crazies”, throw in a dash of “Manchester Morgue”, add a famous French porn starlet, and you get "The Grapes of Death".  Let’s see what happens when we throw in a dash of Starkwell and Lovelock.

Starkwell: If it is possible for a guy to have both the worst hair and the worst moustache, I think that guy has done it.

[Ugly Guy is not feeling well, foreman says, “Back to work, we get new airtight masks tomorrow.”]

Starkwell: Why would they be working without airtight masks?

Lovelock: Times were tough, not everyone can afford such luxuries.

[Ugly Guy runs into our heroine on the train.  His face is melting.]

Lovelock: You think she’s running away from him because his face is melting, or because his hair and moustache make him look like a rapist?

Starkwell: Probably a little bit of both.

The pace was, deliberate, at best.  As Elisabeth flees the train into the French countryside, she stumbles upon a farm house, where the farmer has a melty hand.  I should mention Starkwell was angry that many shots appeared to be out of focus.

[Farm Guy kills his daughter after she tries to help Elisabeth.]

Starkwell: Obviously he had to rip her shirt off first.

Lovelock: Well… yeah to show that she had sores just like him…

Starkwell: Obviously the sores were next to her breasts.

Lovelock: The French countryside looks lovely… well, except for the melty homicidal maniacs.

Starkwell and Lovelock weren’t saying very much.  It’s hard to have much to say when not much is happening on screen.  That being said, I wouldn’t say they weren’t still somehow enjoying it.

Lovelock: Well he is French, maybe he’s not sick, maybe he was just whipping up a batch of crepes…

[He nails her to a door, topless, chops off her head.]

Lovelock: Scratch that.  Unless he needs her head for his crepes.

[Brigitte Lahaie strips down to prove to The Vigilantes that she has no sores.]

Lovelock: Hey, just be thankful that it’s Brigitte Lahaie and not a dude.

Starkwell: I love that even the on-screen characters are like "you didn't have to strip, you know."

Starkwell: Lesson number one, if the fake severed head looks that fake, probably would be wise not to have such a long close-up of it.

Lovelock just fell asleep.  The Two Dudes that rescued Elisabeth and are now bringing her to her vineyard.  Somehow, they manage to IMMEDIATELY figure out, EASILY, that all of this must be caused by the wine… as if it was somehow obvious.  It wasn’t.  Well, not to the viewers anyways, unless you've read the back of the box.

[Gun Dude shoots Elisabeth’s fiancé, because his face is melting.  Elisabeth then decides to kill Gun Dude.  All of the noise wakes Lovelock up.]

Lovelock: I guess I’m still half asleep, everything looks all blurry.

Starkwell: No no, that’s still just the terrible camera work.

Then the movie ends.
Documented by Kev D. and Posted at 08:15