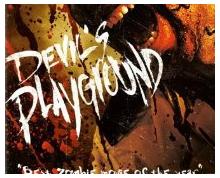 A newer zombie film from the UK, "Devil’s Playground" apparently offers SUPER ATHLETIC FAST ZOMBIES.  Which probably will just end up meaning a hybrid between two film fads from this movie's production year, zombies and parkour.  In any case, let’s see if it can keep the interest of our resident zombie aficionados Starkwell and Lovelock.

[Montage explaining how the outbreak started.]

Starkwell: Who the fuck would volunteer for that?

Lovelock: And I thought the FDA was too loose.

We are then introduced to a series of characters and some recognizable faces.  Most of the characters seem to be criminals.  Starkwell said something like “I smell an Anti-Hero.”

[Scientists lose control of one of the trial patients.]

Starkwell: They don’t even know if it’s contagious?  Worst scientists ever.

[Main character shoots zombie in the head a lot.  Bitten scientists immediately sprout up and ATTACK.]

Lovelock: And the scientists got what they deserve.  Win win.

This is a pretty violent mess.  And the outbreak EXPLODES ALL OVER LONDON.

[Cole, clearly infected, shoots a dude who tries to kill him.  In the head.]

Then zombies chased Cole through a parking lot and there was some of the lamest and most forced parkour ever.  They laughed.  Hard.  There wasn’t much talking after that.  They were watching the movie pretty quietly, seemingly interested at what would happen next.

[Zombies are scared of the water.]

Lovelock: Geez, are they zombies or SYNGENORs?

Lovelock: Are they zombies or the stupid aliens from "Signs"?

Starkwell: I have a big problem with the fact that some people turn zombie instantaneously, and others take a long time.

Lovelock: I have a big problem with the fact the American dude is a total douchebag.

Starkwell: Well, at least they’re playing up the idea that our worst enemy is ourselves.

Lovelock: I guess… more like our worst enemy is the dude from the USA.

Starkwell: And his piece of shit British lady friend.

[Joe doesn’t want Angela to go with Cole, fearing that they will do experiments on her.]

Starkwell: Joe seems like a good guy and all, but doesn’t he realize that she is the key to making this horrifying outbreak stop?

Lovelock: He’s either stupid, or selfish.  Either way, it ain’t great for ol’ Joe.

There’s a fairly intense ending, complete with standoff between our two heroes and a horde of zombies.  Lovelock cried, Starkwell laughed at him.  Good times were had by all.  Fairly cookie cutter stuff, but executed well enough to deserve a place in the mediocre pile of “not that shitty” zombie movies.

Lovelock: It is pretty sweet that Cole’s weapon of choice is the hammer.
Documented by Kev D. and Posted at 20:15