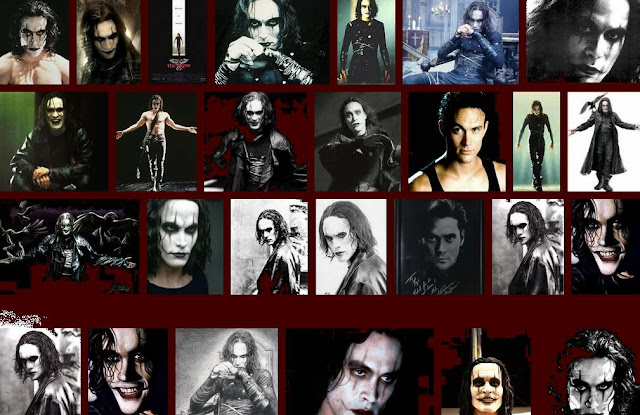 Undead ass kicker out for revenge.  Who could ask for more?  It is time for Lovelock and Stakwell to witness Brandon Lee’s swan song, and see if they end up asking for more.  Considering that there were a bunch of sequels made, I guess someone asked for more.  One thing is certain, we all wanted more Brandon Lee.

Lovelock: How can a young girl have a voice that scratchy?  She sounds like a fifty year old chain smoker.

Starkwell: Hopefully she doesn’t narrate too much of this.

Lovelock: It’s ok, Brandon’s coming soon.  I can feel it.

ERIC DRAVEN RISES FROM THE GRAVE!!!  Lovelock took out a pair of nunchuks he had stashed under the couch cushion and started swinging them around.  It was all fun and games until he hit himself in the nuts.  But at least when Draven had his awful rape/murder flashbacks followed by his good-times-with-shelly flashbacks, Lovelock had an excuse for why he was crying.

Starkwell: The soundtrack does date the movie a little.

Lovelock: I’d have trouble being The Crow, because I hate birds.

Lovelock: Well, yeah that sucks too, but birds really freak me out.

Both Starkwell and Lovelock seemed to be enjoying the movie.  Pretty dark stuff.  They were very excited for Draven to keep killing more dudes.  Hopefully he’d kill Darla, our new favourite person to hate.

Starkwell: “At least he didn’t do any of that, ‘walkin’ against the wind’ shit.”  Best line ever.

We get a little more back story into why they were targeted a year ago.  It all makes us hate the bad guys even more.  There’s a certain cheesiness to the movie, but somehow it works.  Like an old grindhouse pic or a bad kung fu movie.

Lovelock: Not bad.  Would have been cooler if he was playing insane drone or doom metal or something.

Starkwell: He’s kind of the coolest super hero ever.

They put it to a vote and decided that the worst character is the Asian Half Sister.  She sucks.

[Draven is about to go back to the afterlife to be with his lady, but notices that Sarah was taken.]

Lovelock: Aw man… see, if it wasn’t for the stupid kid, he’d already be in Happy Land.

Starkwell: Whatever, he needs to kill these dudes.

[Crow is shot, Draven is vulnerable, but in comes ERNIE FUCKING HUDSON!!!!!]

Then Lovelock made up and sang some song about Ernie Hudson.  I think he mentioned “No Escape” at one point.

Lovelock: And that’s why I have an irrational fear of birds.  That could totally happen.

Then Draven basically goes all Spock Mind Meld on the bad guy and his brain explodes and he gets impaled on a cross.  It’s awesome and Lovelock and Starkwell cheered.  Draven and Shelly are reunited and everything is awesome fantastic.  It does end on another Young Girl Sarah narration, which annoys Starkwell, but not enough to ruin the experience.
Documented by Kev D. and Posted at 09:45