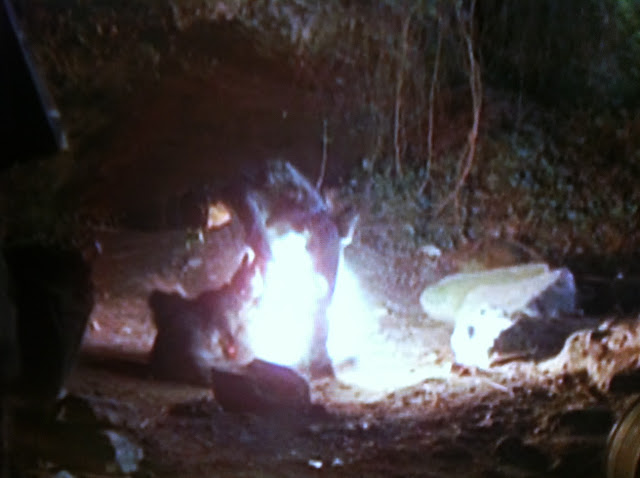 Starkwell: Lesson number one, never open a film with THE GRAINIEST STOCK FOOTAGE EVER.

Starkwell: Do you really not see a problem?

Then there was a shot of a soldier petting a dog, which then explodes and Lovelock and Starkwell laughed so hard that the neighbours complained.   Also, the soundtrack sounds like Isaac Hayes wrote it.  I mean, on an off day, but nonetheless, just like him.

Starkwell: Why.  Of course they eat her boobs.

[It was all just a horrible JOHN SAXON dream.]

Lovelock: But it felt so real.

Starkwell: Dear Roper, put some pants on.  Sincerely, me.

There was a sketchy scene where Saxon gets seduced by a teenage neighbour girl.  He may or may not have then tried to take a bit out of her.

[Army Dude takes a bite out of a girl’s neck at the movie theatres.  The girl was having her boob sucked by someone sitting next to her.]

Lovelock: Well, at least he didn’t bite the booby.

Starkwell: Why does there always need to be a booby involved though?

Starkwell: His name is Charles Bukowski?

Lovelock: Apparently he can somehow use a shotgun like a sniper rifle.  Also it has INFINITY AMMO.

[Cops close in on Bukowski.]

Starkwell: “When I’m through with him he’ll be singing from his asshole”… What does that even mean?

Lovelock: Maybe he plans on feeding him beans.

Not a whole was happening.  For a movie that looked this zany, as Starkwell put it “it sure moves at a snail’s pace.”

Starkwell: So… it takes a REALLY small time for it to affect some, but somehow in Roper it’s slow acting?

Lovelock: Well, he was able to beat Bolo.

The outbreak gets going though, and it’s pretty insane.  There were not one, but three air guitar solos played by Lovelock over the next twenty minutes.  But, as Starkwell noted “it took an hour for it to get here.”

[Vigilantes from beginning come back for Charlie, they attack Roper and his Gang of Cannibals.]

Starkwell: The biker gang from the beginning just happen to be there?

Lovelock: Definitely one of the weaker eye gauges that I’ve ever had the pleasure of seeing.

Starkwell: Who are we supposed to be rooting for?

Lovelock: I think the answer is John Saxon… but I don’t like it.

Starkwell: I’m rooting for this to be over soon.

The cops were chasing them through the sewers, and during one of the flame thrower shots, it was clear that they set an actual live rat on fire.  Now, I don’t like rats, but that’s weak.  When Tommy was set on fire, however, the crowd (Lovelock and Starkwell) gave the film a standing ovation.  It’s a small crowd I know, but it was impressive nonetheless.  The movie ends with a twist that isn’t really a twist wherein the neighbour kids are infected and have eaten their aunt.  I guess the world will end shortly thereafter.  Starkwell and Lovelock were just thankful that the movie had, in fact, ended.
Documented by Kev D. and Posted at 18:45