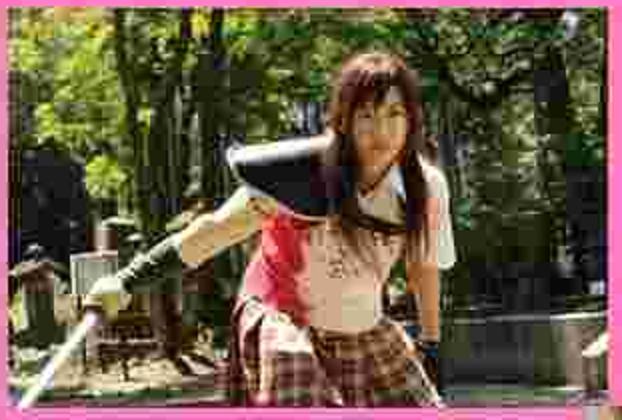 There have been some incomparably shitty Japanese zombie films that I have already subjected Starkwell and Lovelock to.  With that in mind, allow me now to potentially show them another one.  They seem, well, not super excited.  This DVD jumps straight from mildly pornographic previews to the movie.  Definitely a good sign!

[Scientist Guy gets bitten by a zombie, turns to one in bathroom.]

Lovelock: Okay, okay, off to a decent start.

Starkwell: Yeah, except that it looks like it was shot with an iPhone.  By a five-year-old.

Lovelock: Wait… is he watching a movie, or the news?

Starkwell: I know, reading subtitles and paying attention to what is happening is a lot to ask of you.

So these two school girls go to a remote village to visit one of their grandfathers who is apparently some awesome doctor.  He wears an eye patch and has a mistress half his age, so he definitely has that going for him too.  We are very quickly introduced to a zombie horde and some guys who will CLEARLY be comic relief throughout the film.

Starkwell: So many of these mid two thousandy Japanese movies have blue zombies.  It’s like they JUST NOW saw “Dawn of the Dead” and assumed that the zombies need to look like that.

As much as he hated to admit it, amidst some of Lovelock’s laughter, Starkwell admitted that “some of the jokes actually work.”

[Grandpa’s young wife is a gold digger, aiming to kill him, discusses her plan with Haircut Guy.]

Starkwell: Is that zombie touching himself?  This movie will not keep me around much longer if it keeps this up.

[Maids compare their bare breasts with one another.  Close-ups on nipples aplenty.]

Starkwell: Seriously, is this movie trying to get rid of me?

He stuck around.  The perverted stuff was short-lived enough.  Soon the zombies were at the Grandpa’s cabin and all hell started breaking loose.

Lovelock: Honestly, I think most nerdy white guys at a comic con could throw together a better sword battle than that.

Starkwell: I wouldn’t want to watch that either.

[Scientist Guy from the beginning is a zombie, and yet, he walks and talks and acts completely normally.]

Starkwell: Aw  HORSESHIT.  I’m one step away from bailing on this.

Lovelock: Zombie Hunter arm? So... the movie that the nerd guy was watching WAS really happening... in life?  Either way, that arm looks like the rubber leg off of a fireman’s jumpsuit.

Starkwell: Seriously, is that supposed to look like a muscular arm?  Because it doesn’t.  It bends all funny in all the wrong places.

Then there was a make-out scene with Mistress Bitch and a zombie, and zombie bit out her tongue.  Then IMMEDIATELY after, he bit her in the neck, and as she opened her mouth, she stuck her tongue out.  With that glaring disregard for the viewer, Starkwell finally left, without saying a word.  Then a very long time went by before Lovelock even said anything, other than what sounded like a bored sigh.

Lovelock: The last time I saw a stunt double that obvious was in the ‘Buffy’ TV show, when they used to put a blonde wig on some buff dude and try to pass him off as Sarah Michelle Gellar.

[If Starkwell were here, he'd say something like "if they're going to get an obvious stunt double, at least they could have gotten one that knew what he was doing."]

For some reason the Scientist Guy decides to start eating people AND talk in an incredibly high-pitched voice AND repeat the word ‘delicious’ over and over again.  I think even Lovelock was now considering leaving.  Mostly, due to boredom.  Then he spent the entire final ‘battle’ laughing hysterically, because the Final Boss looked like something that would have fit in pretty well on the earlier episodes of the "Power Rangers”.  You know, the Mighty Morphin' kind.

Lovelock: The story made about as much sense as people that like shitting on one another.