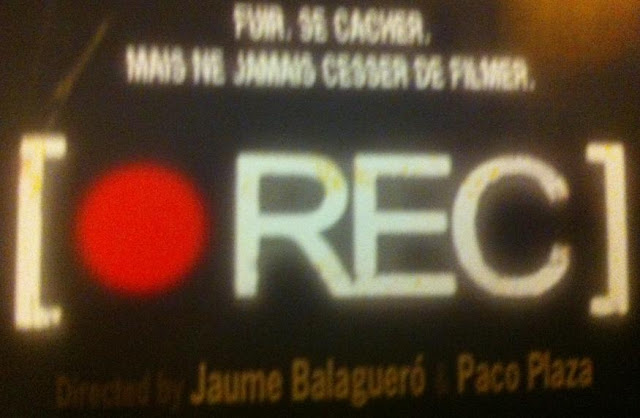 Amidst all of the other documentary / found footage / lo-fi SHIT being made, an occasional gem emerges.  Such is the case, according to most, with the Spanish film “REC”.  There has since been a sequel, as well as an American copy, which, from what I know, is basically the same movie, just made by Americans and about a year later.  Lovelock has already given me a hard time about the fact that there will be subtitles at play here, but I think he’ll get over it once he starts getting the shit scared out of him.

Starkwell: I think I’d watch this show if it actually existed.

Lovelock: I think it would be cool if they had taken an ACTUAL late night program.

Starkwell: It does look like they went into an actual Fire House.

Starkwell and Lovelock went quiet for a while.  The authenticity of it all intrigued them, and made them all the more frightened at the prospect that crazy shit was totally about to go down.  They seemed stressed for the Reporter, Angela, and her crew.

[Firemen are called to a building, where a woman is trapped or something.]

Starkwell: They picked the creepiest building ever.

Lovelock: I’m pretty sure all the buildings in Spain are like that.

Starkwell: Angry, screaming and scared Spanish people stress me out.  In a good way.

Then a body dropped in the background, from a much higher floor and exploded on the ground.  Lovelock actually screamed out “I LOVE MOVIES!!!!!!!!!!!!!!!!!”  Once this movie gets going, it never lets up.  A lot of what Starkwell and Lovelock were saying from here on out was stuff like “Yeah” or “Fuck yeah” or “Yes.  Yes a million times yes!”

Lovelock: I was thinking “Wendy’s” logo.

The people in the quarantined building all start turning into zombies and turning on each other.  Camera man Pablo catches the action as the HASMAT team come in and make everyone more scared, Lovelock and Starkwell included.  They explain the virus as the outbreak BLOWS THE FUCK UP.  Starkwell and Lovelock decided they need to learn Spanish, pronto.

Lovelock: She must have heard us.

Starkwell: They caught on pretty quick.  They abandon people within milliseconds of them being bitten.

Lovelock: Survival of the fittest.

The movie is intense.  The emotions are real.  Starkwell and Lovelock’s reaction?  Well eventually, they were excited and happy, once the FEARFUL SOBBING, CRYING AND SCREAMING from the ending subsided.  They already can’t wait for the sequel(s).  They liked it enough that they want to watch the American one for comparison’s sake.  I have a feeling that the documented conversation might be very similar.  We’ll have to wait and see.
Documented by Kev D. and Posted at 23:10