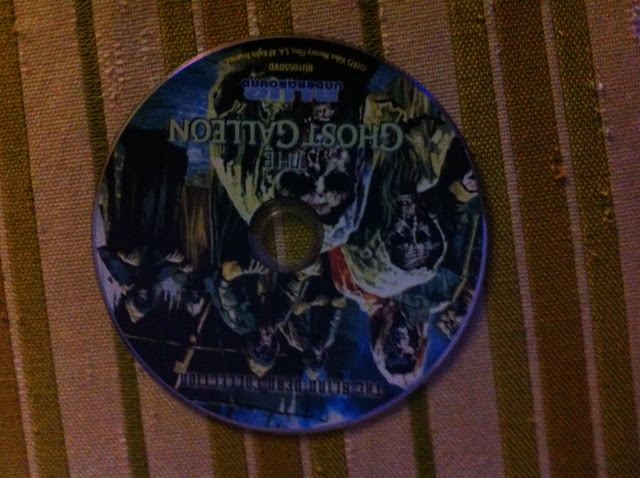 The year was 1974 and Amando De Ossorio wanted to add another chapter to his infamous Blind Dead series, so, probably, like all great directors, he thought to himself “Let’s put them on a boat.”  Ghost Pirates are cool, Zombie Pirates are cooler.  So hopefully the third instalment in the series lives up to the hype that I just gave this movie when explaining it to Starkwell and Lovelock.  If it doesn’t, then it will just be one more in the long line of shitty nautical zombie films.  Yeah “Zombie Lake”, I’m looking at you.

Starkwell: This is the least enthusiastic bikini photo shoot ever.

Lovelock: Well, the models do look like they were rounded up at the bus station, given a bunch of drugs and shoved into bikinis.

[We find out that Kathy the bikini model has gone on a top secret bikini photo shoot.]

Lovelock:  I guess those exist.

Starkwell:  What the fuck is going on?  This movie is insane.  Already.

[Apparently Kathy has been placed in the middle of the ocean on a raft as a part of some crazy marketing scheme for TUCKER’S SPORTING GOODS.]

Starkwell: I wonder if shit like that really happens.

Lovelock: Oh, totally.  I’m pretty sure Nike did it once with their Air Jordan shoes.

Lovelock: Sure.  Why not?

[Girls in boat, Kathy and Lorena, get hit by old seemingly abandoned ship.  Lorena boards it with a grappling hook.]

Starkwell:  Who would board what looks like an old pirate ship to spend the night?

Lovelock: Spanish bikini models who accept top secret marketing missions to the middle of the ocean with no food or water.

The shots of the old pirate ship look like a toy boat floating in tub in a steamy dark bathroom, probably because it is.  Overall, though, the locations used in the film are pretty sweet so far.

Starkwell: Just once, I’d like to watch one of these Spanish movies and not have to see a rape scene, a rapist, a guy giving off rapey vibes, or awkward lesbian sex.

Lovelock: You should probably stop watching these movies then.

Lovelock: Well, that and scurvy.

Then there’s a scientist guy who gets mad at Tucker for suggesting that the girls saw fog when the SCIENTIFIC data suggests that there was no fog in the ocean that night.  But then, the very same scientist tells them about a GHOST SHIP that sails the water and that not everything can be explained by science.

Starkwell: “This is a serious science lab, I don’t have time for this nonsense…”  TWO MINUTES LATER “… Take me with you, I wanna see the haunted magic ship!”

Lovelock: Science looks like fun.  Make your own rules.

A little more than half an hour in and we see the Templars slowly rise from their tombs.  They look as cool as ever.  Lovelock and Starkwell gave the Blind Dead a standing ovation.

Lovelock: It’s great to see the old gang back together.

Starkwell:  The characters seem to be taking the sight of a ghost ship rather well.  “Let’s board it.”  Seems dumb.

Lovelock:  I’m sure it will turn out to be quite dumb.

Given that there is a solid twenty minutes in between Blind Dead appearances, and that the in between is mostly dimly lit shots of people moving slow, talking slow and being boring, Lovelock had to wake Starkwell when the Templars FINALLY decided to go after Noemi.

Starkwell:  That is, without a doubt, the longest, most boring, slow-moving and overacted death scene in the history of all the world.

Lovelock: Nice try, De Ossorio, but you lost at SLOWEST DEATH EVER.

Lovelock: I think this is where they got the idea for Scooby-Doo.

Starkwell: But there’s no dog.

Lovelock: He’s like the least important character in that show.

Starkwell: The dog is named Scooby-Doo.

Lovelock: All I’m saying is that I hope that at the end, they take the masks off the Blind Dead and find out that they’re actually the bikini models from the beginning.

[Starkwell got really mad at the movie when the Scientist used a burning cross to scare them back into their graves, but then IMMEDIATELY after that, the characters all thought, “How can we stop them?”]

Then the movie wrapped up with the characters shooting the tombs into the water and then try to swim to shore.  What is worth mentioning is that the ship magically catches fire, and there was a shot of the ship burning, and it was the worst looking model I have ever seen.  Lovelock and Starkwell rewound about ten times to watch it over and over again, howling with laughter at the cheapness (or cheepnis, as Zappa would call it).  Somehow the Blind Dead end up in the real world on shore, and probably the whole earth is screwed.

Starkwell: Worst of the series so far.

Lovelock: Basically.  But mostly I said that because I want the Blind Dead to put their creepy skeleton hands down.  Why do they always have to hold them up like that?

Starkwell: Well, at least De Ossorio didn't show the Blind Dead cutting into a tit this time around.

Lovelock: I was just thinking to myself that this whole thing needed more sword into booby action.