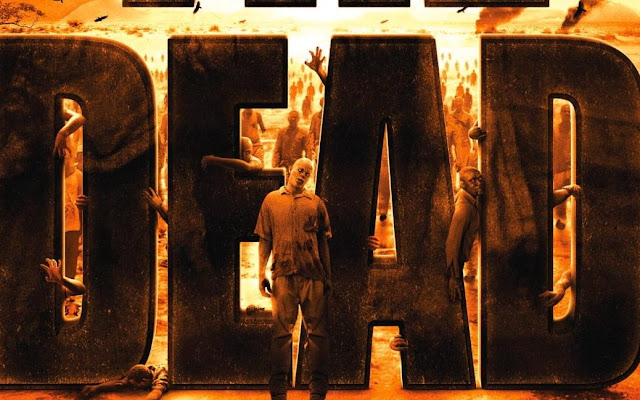 A lot of people argue that when it comes to zombie films, there really is nothing new under the sun.  But what if that sun was in AFRICA?  We’re here to find out if the Ford Brothers have managed to make something special, or simply create another stale entry in a sadly overpopulated genre.  Starkwell and Lovelock just seem psyched to be watching something relatively new.

Lovelock: Pfff… haven't you ever heard of snow ninjas?  They TOTALLY wear white pants.  Whatever, he’s totally ninja.   Did you see the way he snuck around that zombie?

Starkwell: That’s the slowest zombie ever… my grandma could sneak around him.

Then the film cuts quickly to a flashback, and there are people bleeding and it’s all intense.  They’re in a plane trying to evacuate out of West Africa but TOO BAD YOU’RE OUT OF GAS AND THEN THERE’S A ZOMBIE OUTBREAK ON BOARD AND ON THE GROUND ALL HELL IS BREAKING LOOSE AND THE PLANE CRASHES INTO THE OCEAN.  Kablammo.

Lovelock: Why haven’t we always been watching this movie?

Starkwell: Africa doesn’t have enough problems, now they get zombies too?  Depressing.

Lovelock: That’s one way to solve the hunger problem.

Main character dressed in some kind of jumpsuit washes up on shore and tries to avoid being eaten by the zombie horde wandering the beach.  As they attempt to piece together his background, Starkwell and Lovelock quietly and thoroughly enjoy the on screen activity.

Lovelock: Lesson number one, never walk through a cornfield during a zombie outbreak.

[Main character runs over a zombie’s head.  Steals his supplies.]

Lovelock: Why doesn’t every movie have a scene like that?

Starkwell: Not sure every movie could pull that off.

Lovelock: Aw, that’s easy.  When they teach Henry to drive, he uses that new skill and  drives over the head of that dude that had sex with his wife while he was in a coma and tries to make up for it by giving him  a picture frame.

Starkwell: When do they teach him to drive?

Lovelock: Get this man some Ritz crackers!

The main character is a bit stiff, and not the best actor, but Starkwell says “somehow it works.”

Lovelock: This is basically a "Lethal Weapon" remake.

Starkwell: Are you only saying that because there are two dudes, and one is white and the other is black?

Lovelock: Free South Africa you dumb son of a bitch.

Lovelock: I just realized that Joe America, aka Lieutenant Murphy, is the ninja from the beginning.

Starkwell: You just noticed that?

Lovelock: Well, at this point he was still just an apprentice ninja, with much to learn.

Lovelock: That’s why I try not to run into every zombie and bush in sight.

Starkwell: Yeah, that’s why.  Also, I think the truck is fine, it just needs gas.

Lovelock: Exactly, don’t you know how much gas it wastes to push the pedal to the metal and run over a zombie?

[They swerve to avoid a zombie, crash into a tree / ditch.]

Starkwell: All of a sudden he decides not to run right into them?  A little consistency please, Captain America.

Daniel dies, and I swear I saw a single tear gliding down Lovelock’s cheek.  He claims it was because he was thinking about a time he got hit in the nuts, but we all know the truth.

[Lt. Murphy inherits a baby from an infected woman he runs into along the way.]

Lovelock: I must admit, “Three Men and a Baby” would have been a much better movie if the reason thy got a baby was a zombie outbreak.

[He gives baby away to a truck passing by, full of survivors.]

Lovelock: Why didn’t Guttenberg think of that?

Lovelock: What?  If anything it's Ted Danson.

Lovelock: I fucking told you!

Then Lt. Murphy kills a bajillion zombies, mostly with his machete, and Lovelock punched a hole in the wall.

Between the nice mix of CGI and old school effects, the beautiful locations, the eerie music, and the good writing, acting and directing… this was one hell of a fun ride.  Starkwell and Lovelock seem hopeful that the genre might still have some fun tricks up its sleeve.  Bravo, the Brothers Ford.
Documented by Kev D. and Posted at 20:45