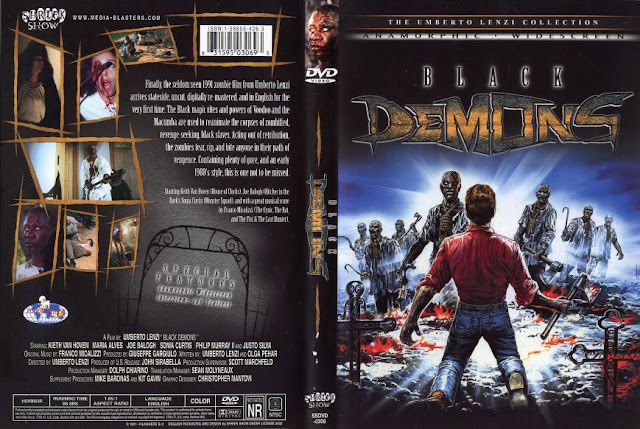 You may remember Umberto Lenzi from such films as “Nightmare City” and nothing else.  Regardless, Starkwell and Lovelock had a rip-roaring good time when they atched that, so, expectations are through the roof for “Black Demons”, one of the infamous director’s final pieces of movie.  It’s Brazilian Voodoo time.

[Main man Dick FREAKS OUT the local drum kids.  In turn, Dick is freaked out.]

Lovelock: That’s why I never pick up sea shells with weird paintings on them during a group of street kids’ drum and dance performance.

Lovelock: I love that one of the local voodoo kids is sporting a Batman shirt.

Starkwell: Dick disappears, and his sister decides the best course of action is to bang the British dude all day?  Her brother might be named Dick, but she’s the dick.

Lovelock: I don’t know, if anything, British dude is the dick.

Since clearly having any backstory is unimportant to Mr. Lenzi, we don’t know why Dick is obsessed with Voodoo, or why any of them are even in Brazil in the first place.  The acting is also BEYOND atrocious.  The main girl actually fumbles her lines in a couple of takes, and Umberto didn’t even bother to re-shoot them.  This bugs Starkwell, Lovelock doesn’t care stating that “it doesn’t matter how we get there, as long as we get there.”  When Starkwell asked where ‘there’ was, Lovelock just shook his head and said “if you don’t know, then you’ll probably never get there.”

Starkwell: Who goes “hiking in da’ woods” in a jean skirt and a jean jacket?

Lovelock: I don’t know, but Jose is shaping up to be my favourite character.

Starkwell: I don’t know… did you see the way he ordered the housekeeper around?  He seems like kind of a dick.

Lovelock: Pretty much everyone in this movie is a dick, except, well, Dick.

Dick then goes and plays voodoo music, off his tape recorder in graveyard.  And then graves burst into flames, tombstones bleed and zombies start emerging from the ground.  Simultaneously, without taking their eyes off of the screen, Lovelock and Starkwell high-fived each other.

[Sonia hears a noise and goes to investigate.  Outside. In her Underwear.  Then she is surrounded by zombies.]

Starkwell:  I bet she feels pretty stupid now for not having put pants on.

Lovelock: I don’t know, lack of pants might make her more agile and nimble

[Zombie crowbars her eyeball out.]

Starkwell: Yeah… Agility does not seem to be her forte.

[Jessica goes wandering on her own.]

Starkwell: In keeping with the theme of missing clothing Jessica decides to not wear a bra.

[She sees a zombie.]

Outside of the laughs that the bad acting got out of Lovelock and Starkwell, there wasn’t a whole lot going on, and they were getting CRAZY bored.  At one hour in, the zombies just claimed their SECOND victim.  This is insane considering that “Nightmare City” had a death count of about a million in the same amount of time.  The zombies in this film seem to prefer spending their time popping up into the screen holding axes and crowbars and staring menacingly.

Lovelock: Well, on the bright side, the zombies seem to like crowbarring peoples’ eyeballs out.  So the movie has that going for it.

Starkwell: When making a film’s pros and cons list… if the pro column only has “crowbar to eyeball deaths”, you’re in trouble.

[British Kevin drives car into side of the road.]

Starkwell: Almost as slow as the pace of the film.

Dick kills Jose and Jose displays some of the worst acting anyone has ever seen.  Lovelock and Starkwell re-watched his death about ten times.  It kept getting funnier and funnier.  Anyways, then eventually Stupid McGee and British Dumbfuck figure out Dick has gone evil.  Throw in a few explosions, a rip-off of Jack Nicholson hacking through the door in “The Shining”, some early nineties Mom jeans, and Dick’s eventual death, and you’ve got yourself an ending.  Not good, not the worst, but, it’s an ending.

Lovelock: Apparently zombies are like walking sticks of dynamite.

Now imagine “Nightmare City” if the zombies were explosive.
Documented by Kev D. and Posted at 19:15