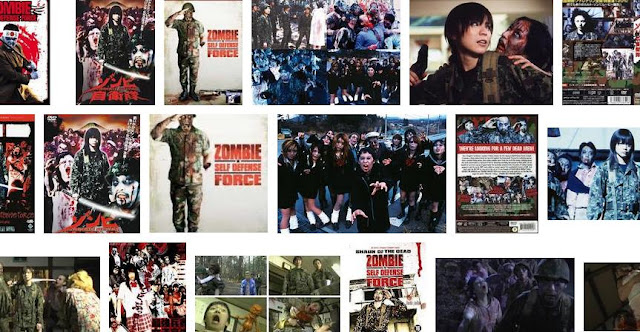 The same director that brought us “Stacy” decided to dive right back into the zombie genre ass first with “Zombie Self-Defense Force”.  After how much Lovelock and Starkwell hated his previous work, I won’t dwell anymore on introducing this film.  Here, we, go…
[...]
[Every Japanese stereotype you could think sees a UFO.]
Lovelock: I guess if it’s a Japanese person making the film, it’s not racist?
Starkwell: Whatever it is, it’s the cheapest computer effects I have ever seen.
Lovelock: It looks like a local mattress store commercial.
[...]
[Soldiers go to investigate.]
Starkwell: She looks like she can barely hold her head up while wearing that helmet, let alone be a combat soldier…
Lovelock: In Japan, women come first… wait is that how it goes?
[...]
As the outbreak starts, RIGHT AWAY, The gore effects are absolutely terrible, but Lovelock feels “somehow it gives it a certain charm… well, so far, anyways.”
[...]
Starkwell: Of course the underwear model survives.
Lovelock: I think she’s a pop singer.
Starkwell: Same difference.
[...]
As much as Starkwell wanted to hate the movie, he couldn’t help but appreciate that the movie doesn’t take itself seriously, and even pokes fun at itself, but in a somewhat intelligent way.  So far, so good.  It also seems to have respect for the material it intends to replicate and "honor".
[...]
[We think Girl Soldier might be a cyborg.]
Starkwell: So Aliens and Zombies weren’t enough?  We need to throw in man-made cyborgs?
Lovelock: Why settle for a burger when you can have a TWO burgers... and fries?
Starkwell: Increased potential for diarrhea, for starters.
[...]
[Pregnant zombie explodes, and then, zombie fetus.]
Starkwell : How could anyone have thought that puppet would work.
Lovelock: Are we watching the same thing?  This is incredible.
Starkwell: I think something is lost in translation.
Lovelock: But no one is talking…
Starkwell: No, I mean between me and you.
[...]
Then for a while, Starkwell and Lovelock didn’t have much to say.  The movie was pretty cookie cutter.  The characters were bunkered down in a house in the woods, zombies trying to get in.  It was all pretty fun.
[...]
[Soldier Girl is part machine – they revived her after a critical injury BIONICALLY.]
Lovelock: So basically she’s "Robocop".
Starkwell: If that helps you understand it.
[...]
[On the subject of why was she a cyborg?]
Starkwell: So basically they just wanted to make her kick ass, but needed an explanation, so they came up with cyborg.
Lovelock: There are aliens and zombies… you would think they would trust us to suspend our disbelief enough to allow her to kick ass without being a cyborg.
[On the subject of why there are UFOs crashing.]
Starkwell: So the UFOs crashing were a coincidence and had nothing to do with the zombies?
Lovelock: Well it appears that the world is ending.
Starkwell: Now I think there HAS to be something lost in translation.
Lovelock: It's pretty simple, basically she’s "Robocop".
[...]
The movie ends, and, in fact, the last ten minutes were the worst part of the movie.
Documented by Kev D. and Posted at 16:30