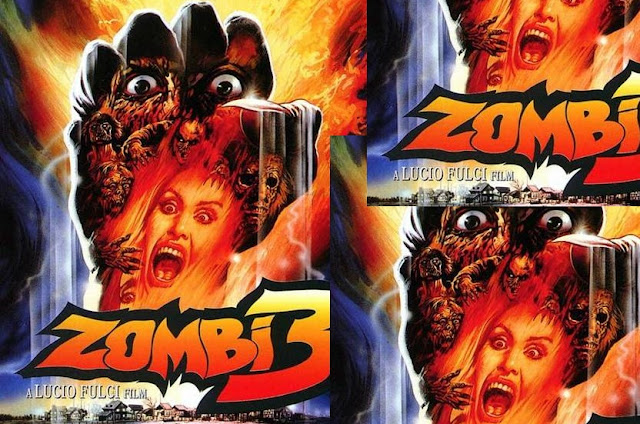 A movie so good that it took THREE directors to complete it!  This started off as Fulci’s 1988 sequel to his own 1979 cinematic gem “Zombie Flesh Eaters”, but apparently took a wrong turn somewhere in Bruno Mattei town.  If you want the whole history, look it up.  I’m only interested in what Lovelock and Starkwell will have to say about the finished product.

Starkwell: Don’t start playing air guitar quite yet, this is probably just the Fulci portion.

Starkwell: I think that they spent the entire film’s budget on that helicopter.

Lovelock: It certainly wasn’t spent on good costumes, good actors or making it look real when people are shot.

[Sick Infected Thief runs to an island resort, hand is all decomposing, face gross.  He gets a room.]

Lovelock: That’s why I never stay at those all-inclusive places.  They give a room to anyone.

[The over dubbing is so bad, that it actually helps make the movie a comedic goldmine.  Their favorite so far was when the Room Service guy, when asked to bring Sick Guy some water, says to the Concierge “Again??!! What is this guy trying to get in the Guiness Book of World Records?!?!”.]

Lovelock: Yeah… for water drinking at a hotel.

Lovelock: That’s why when I cut off a hand, I start with the tourniquet.

Starkwell: Why would he take his mask off?

Lovelock: So that they can all hear him scream “FOUND HIM!”

Starkwell: But it defeats the whole purpose of wearing the suit in the first place.

Lovelock: Oh, sure, if you’re worried about that sort of logic.

We’re introduced to a group of soldier boys, and a new winning line emerges when one says “I don’t remember her name, but I sure remember her tits!”  Starkwell and Lovelock repeated it a few times.  The film seems to be introducing an awful lot of characters, such as the young lovers in the convertible, the RV full of nerds and loose women, the soldier boys, the Radio DJ and of course, General Hard-On.

Lovelock: SO MUCH cooler than the CGI birds in that Resident Evil movie.

Lovelock: Not to mention “The Crazies”.  It’s like they say, ‘life imitates art’.

Starkwell: What does that have to do with anything?

The dubbing just got worse and worse.  It started to look as though the actors were really struggling to get the English out, but then they just brought people in to over dub it all anyways.  Lovelock’s new favorite line: “I’m free too, in other words I don’t have a steady girl.”  I guess you had to be there.

Lovelock: Why do people walk so slowly when they’re scared?  Wouldn’t you want to move fast so nothing can catch you?

[Girl falls in water, guy pulls her out, she INSTANTANEOUSLY becomes a zombie, and her legs are missing, perhaps bitten off.]

Starkwell: Are we supposed to assume that there was a zombie shark?  The same from “Zombi 2”? In the resort swimming pool?

Lovelock: That’s why I never swim in hotel pools.

Lovelock: Anyways, I don’t think that was a swimming pool.

Starkwell: Whatever it was, it has some steamy water.

Lovelock is able to look past the horrifying plot holes and inconsistencies in the zombie behavior and cheer loudly at every turn.  Starkwell seems less able.

[Couple complains about how hungry they are and go to the kitchen to look for food.]

Starkwell: Who would be thinking about food at a time like this?!!?!

At one point Lovelock spent ten minutes or so repeating hilarious one liners of dialogue and doing jump kicks.  Starkwell was just looking at him disappointed muttering “this is sooo not jump kick worthy.”

Starkwell: It looks like what a seven year old thinks scientists working on something would look like.

Lovelock: It looks like a connect-the-dots that doesn’t actually make anything.

Starkwell: Oh, it makes something... a bad movie.

Then the nerd guy got gunned down by the HASMAT crew and Lovelock jump kicked so hard he pulled a muscle.  The movie slowed down a bit after that, which gave him time to recover.  But then a zombie ripped a woman’s face off and pushed her into a pregnant zombie’s exploding womb and Lovelock pushed through the pain to perform a picture perfect roundhouse.  Starkwell wondered “why is there a full grown hand emerging from her vagina?  Was she giving birth to a zombie arm?”

Starkwell: Why are the zombies just standing there looking at them?  How could there be a perfectly intact and gassed up helicopter just sitting there? Why are there zombies hiding in the haystacks?  Are they ninjas? WHAT THE FUCK!?!?!?!?!

Lovelock: You raise some valid questions.  Most can be answered by the following.

Then there was the worst twist ending ever.  It pushed Lovelock deeper into the I FUCKING LOVE IT column, and Starkwell further into the WHAT THE FUCK column.  Then there was a sick eighties song during the credits, and everyone agreed that it was TIME… TO… DANCE!
Documented by Kev D. and Posted at 21:15