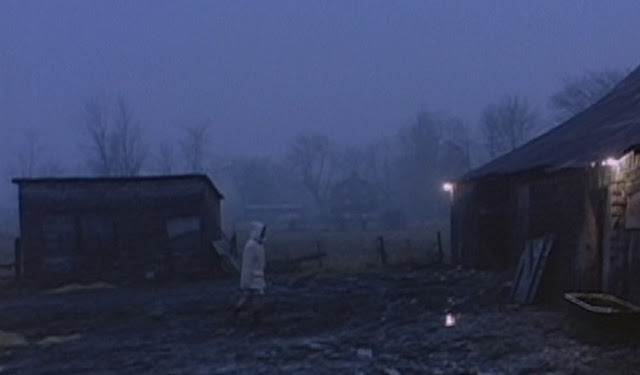 David Cronenberg is a legend in the horror realm.  Also he is Canadian, so that’s cool too!  1977’s “Rabid” was one of his earlier film ventures, before “The Fly”, “Videodrome” or even “The Brood”.  Also it was filmed and takes place in Lovelock and Starkwell’s home city of Montreal, so you know that alone has them all worked up.  Get ready boys, horror awaits!  Executive producer Ivan Reitman?  Awesome.

Starkwell: Yeah that’s why.  Actually, yeah that probably is why.

Lovelock: Well that and the bugs in the face.

[The surgeons use an experimental RADIOACTIVE technique of skin graft.]

Lovelock: Something tells me that this radiation will not produce a Spiderman like hero.

Starkwell: Could that ‘something’ be that the film is called RABID?

The movie really portrays plastic surgeons as complete money grubbing assholes.  And people that get (needless) plastic surgery as total tools.  Starkwell comments that “this is seriously ahead of its time”.

Lovelock: That’ll teach him to go straight for the boobies!

Starkwell: He pulled that off in the seventies on a shoestring budget… OTHER FILM MAKERS TAKE NOTE.

Lovelock: Did you see the zombie guy?  He looked awesome!  Green mouth froth!

[Doctor finds her weird armpit stinger that poisons people and turns them into blood sucking zombies.]

Starkwell: So, in a way, it kind of did turn her into Spiderman.

Lovelock: In a way? It's basically a remake.

[As Chambers hitchhiked her way to the city, poisoning people along the way, the outbreak exploded!]

Starkwell: I don’t know if that’s specifically the reason.

Starkwell: I don’t know about that, but I do know that hearing a heavily accented Quebeccer explain the disease is fantastic.

Lovelock: “Don’t… euh… let anyone bit you…”  As if people need to be told.

Starkwell: Yeah, if not for this outbreak, go ahead, bite away and be bitten!

[Guy gets bit by rabid granny on metro (the Montreal Subway system).]

Lovelock: Oh also, thanks to this film, we have just learned that in thirty-five years the Metro stations have not changed at all.

Starkwell: And apparently Santa’s helpers at the mall used to dress like pole dancers.

Lovelock: That should make a comeback, I think... but smoking being allowed in the malls… yeah that should stay gone.

The fact that the rabid zombies run around eating people is just further proof that Starkwell’s comment about this film being ahead of its time is true on many levels.  Then Dr. Murray came home to find his wife had eaten their baby, and it was truly horrifying.  Lovelock and Starkwell remained deadly quiet for a little while after seeing that.

Lovelock: Why do people push elevator buttons more than once?  Dumb.

[That broke the silence.]

When people talk about the greatest zombie films ever made, rarely does this one come up.  And that’s a shame.  Considering this came out in 1977, as Starkwell pointed out “it should be on everyone’s list”.  Then Lovelock nodded his head so hard that he got whiplash.
Documented by Kev D. and Posted at 00:36