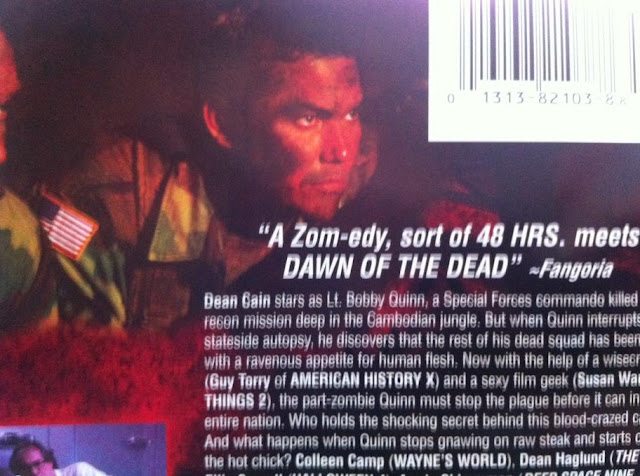 A 2006 Made-for-TV ‘SyFy’ channel movie, “Dead & Deader” was written by Mark Altman.  Altman is no rookie to the Zombie genre, having penned such modern day CLASSICS as “House of the Dead”, and “All Souls Day”.  Wait.  Sarcasm doesn’t seem to come across properly on paper.  When I said CLASSICS back there, the implication was that I really meant TOTAL TURDS.  Let’s see if he got any better with practice.

[Dean Cain leads an army platoon of dudes into a zombie infested SECRET RESEARCH CABIN IN THE WOODS.]

Lovelock: What’s with the frosted tips?

Starkwell: No man has ever pulled it off ever.

Lovelock: Especially not in 2006.  I think Superman needs to reverse time again and get a new fucking haircut.

Starkwell: Judging by the haircut, I'd say he's stuck in the mid-nineties.

[Cain wakes up during his autopsy.]

Starkwell: Shouldn’t the doctor be at least a LITTLE bit surprised?

Lovelock: It takes more than a dead guy suddenly reviving to shock this professional army doc.

[Cain cuts his arm open and pulls out a scorpion.]

Starkwell: So… this still does not shock the good doctor?

Lovelock: Dude, they’re trained for this kind of thing.

Starkwell: Yeah, I don’t think that they are.

Lovelock: I think we are neglecting to talk about the more important issue, Dean Cain’s boobies.

Starkwell continued to make observations about how well the old doctor and the young SEXY girl doctor (who is wearing her hair back and is sporting pointdexter glasses to hide her sexiness) seem to be taking the news of a walking dead soldier.  Then we are introduced to a sassy black fry cook and some bad Dean Cain martial arts, and Lovelock and Starkwell both start laughing.

Starkwell: Why do the zombies have green blood?

Lovelock: Probably so they can get away with showing this on TV.

Starkwell: Like when they released Mortal Kombat on the Genesis without the blood?

Lovelock: Yeah, but unlike that, we can’t enter a code to turn the blood red.

Starkwell: Maybe not, but we can press stop on the remote which is starting to look like a good option.

I should notice that everytime it fades to black, for a commercial break, Starkwell stands up, hoping it’s over.  Lovelock actually seems somewhat into it, and keeps telling him to “try and appreciate the cheese.”

Starkwell: At some point are they going to explain why Superman isn’t turning into a zombie like the others?

Lovelock: About the explanation?

[Cain lobs off zombie head with an axe.]

Starkwell: Obviously, the sexy bartender-film-student steals a cop car and decides to join them in their quest to save the world.

Starkwell: Obviously, they go to a costume shop to get new clothes.

Starkwell: Obviously, we see Susan Ward in her bra and panties.

Lovelock: Do they have to dress the one black actor up like Michael Jackson in “Thriller”?  Are they really going that route?

The dialogue is some of the worst dialogue ever.  The jokes aren’t funny, the story is stupid, the characters annoying.  It sounds like it was written by a fourteen year old.  In 1996.  It sounds like the kind of dialogue you hear between a nerdy customer at Game Stop and the ‘Comic Book Guy’ working the cash.  In 1996.

Starkwell: So… no explanations?  Just everyone’s dead and Susan Ward wants to bang Dean Cain at a motel down the road?

Lovelock: Do you have a better idea?

Much like in the TERRIBLE “All Souls Day”, throughout this movie, the characters reference other movies.  But instead of it ever being some kind of subtle homage, the characters flat out say things like “Do you know what TIE Fighter stands for” or two characters talking about who the best Bond is or Susan Ward explaining the existence of social commentary in Romero’s “Dawn”.  Badly.  However, this time around, Altman didn’t limit it to movies.  Starkwell’s top three incredibly out of place and forced references are:

Who writes lazy, clumsy, dumb and pointless dialogue like that?  A lame person who shouldn’t be writing movies.  The end.
Documented by Kev D. and Posted at 16:00