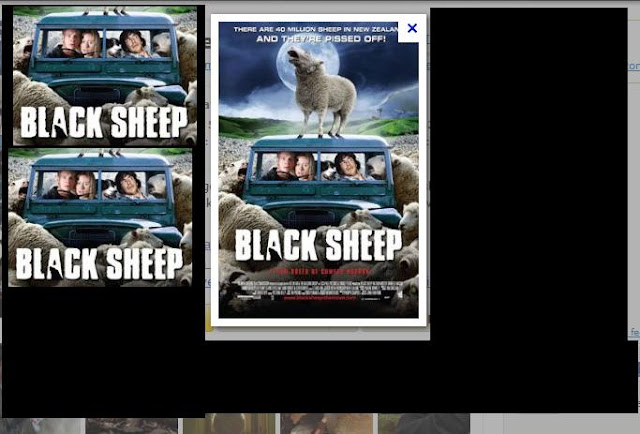 After carefully informing them that they were not about to watch the David Spade / Chris Farley romp, Lovelock and Starkwell were intrigued by the premise of New Zealand’s “Black Sheep”.  While Starkwell isn’t sure that writer/director Jonathan King will succeed in making sheep scary, Lovelock is already totally prepared to set his wool sweaters on fire.  Begin.

[Film is presented by the New Zealand Film Commission.]

Starkwell: Probably not the main reason that most people would.

Lovelock: The Zombie Hall duo is going to New Zealand.

[Hippy Dude steals weird genetic mutant sheep thing from lab, it gets loose and bites him.]

Starkwell: So he has an irrational fear that one day sheep are going to rise up and start killing… and it happens?  Sucks to be him.

Lovelock: I got the same thing with birds.

The movie was good.  The two stayed mostly quiet, watching the story unravel.  They liked the characters, and felt the story was interesting enough.  They did make at least one too many comments about how the main characters were walking around MIDDLE EARTH.  It was the kind of thing that started off funny, but they overkilled it hard, and then never brought it up again.  I think Lovelock secretly hopes it will be funny again later, and make a comeback.

[Experience and Henry fall into a pit of discarded sheep guts.]

Lovelock: She thinks a scented candle is going to help?  Fucking hippies.

Starkwell: Whatever, at least when Henry asked if she was ok, she answered “I’ll never be ok again”… Might be the best line of dialogue ever.

Lovelock: Oh wait, she’s using it like a torch… I may have under estimated her.

In the span of two minutes they managed to get in a sheep fucking joke AND having Hippy Girl Experience fart in Henry’s face.  Much to Lovelock’s and my surprise, Starkwell didn’t walk out.  He just said “I’ll allow it.”

Starkwell: I thought that “Poultrygeist” turned me off of people turning into weird zombie animal things, but this is turning me back around.

Lovelock: This is totally a remake of Pinnochio.

Starkwell: Wait what?  Wasn’t that a goat? And how is this remaking that?

Lovelock: The old lady with the gun is Gepetto, and Hippy Guy is the Pink Elephants.

Starkwell: I think you’re blending some things together there.

Lovelock: I think the Hippy Girl is Bambi.

Then there was a sheep stampede and lots of shots of people being eaten by sheep.  Lovelock stood up and did a most majestic cartwheel followed by several fist pumps.  Starkwell tried not to get hit in the face.  Unsuccessfully.

Lovelock: Fitting that you say that, because I may have just money shot in my pants.

The final showdown between Henry and his brother as a SHEEP MONSTER is obviously fitting because of how the film started.  But then there was a scene where they showed a sheep biting and pulling on the brother’s penis and it was, well, horrifying.  They followed it with a sheep FARTING into a lit lighter and causing an explosion.  Both Starkwell and Lovelock agreed that the film officially jumped the shark with about two minutes left.  It’s a pity, because it was going so well.
Documented by Kev D. and Posted at 22:30