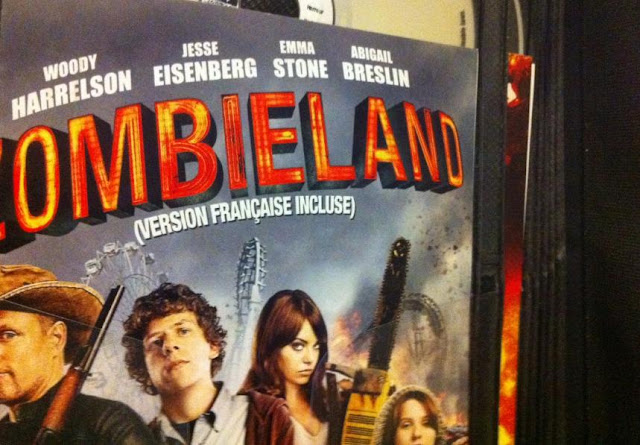 Comedic zombie movies started a very long time ago.  Movies like “Zombies on Broadway” eventually made way for bizarre '70s comedies, and eventually over-the-top fare like “Return of the Living Dead” through the '80s and '90s.  It takes something truly special to stand out in today’s saturated zombie market, and few zombie comedies have really pulled it off in the last decade or so.  “Zombieland” is one of the more recent successes in the field of hilarious zombie films, by most peoples' standards.  I’m curious to see what Starkwell and Lovelock will have to say.
[...]
[Some rules are introduced.]
Starkwell: I could see that with the fast zombies, it wouldn’t take very long for the world to go to hell.
Lovelock: As evidenced by what you see on the screen.
Starkwell: Slow zombies create much harder and tougher people, because more people survive for longer.
Lovelock: Please don’t ruin this with your IDEAS.
[...]
For a while, the two didn’t say much.  Starkwell would start talking about preferring slow zombies, and Lovelock would tell him to stop being an asshole.  Slow or fast, Starkwell couldn’t help but revel in the great dialogue and top-notch acting.
[...]
[Girls con the dudes.]
Starkwell: Nice con job, but what if Tallahassee had just blown her brains out right away?
Lovelock: I guess that was a risk they were willing to take…
Starkwell: Well that’s dumb.
[...]
I’ll be honest with you.  I stopped keeping track of anything they were saying, I was too into the movie.  I’ve said it before, and I will keep saying it.  A good zombie movie has nothing to do with zombies.  It has nothing to do with gore, action or anything dumb like that.  Character.  Characters that you can relate to, root for, and like.  That’s what sets the good from the bad.  Don’t get me wrong, the film has action, but the characters and their development are front and center.  And that is how it supposed to be.
[...]
[Columbus shoots Bill Murray.]
Starkwell: Fuck, why did they have to kill him?
Lovelock: I think if they had kept him alive it would have been the best movie of all time.
Starkwell: That is hands down the best cameo I’ve ever seen.
Lovelock: Best “As Himself” role I’ve ever seen.
Starkwell: Yeah, forget NPH.
[...]
[Columbus rides motorcycle into bushes.]
Starkwell: That gag never gets old.
Lovelock: Best one ever is in “Pee-Wee’s Big Adventure”.
Starkwell: Agreed.
[...]
[Happy ending.]
Starkwell: The purist in me wants the ending to be depressing, but I can’t help but be so happy that it wasn’t.
Lovelock: I’m in love.
Starkwell: With this movie?
Lovelock: Oh… I meant with Emma Stone… but yeah with this movie.
[...]
Starkwell is a purist, but he is willing to forgive fast zombies.  They are both in agreement.  This movie is an absolute gem.
Documented by Kev D. and Posted at 20:30