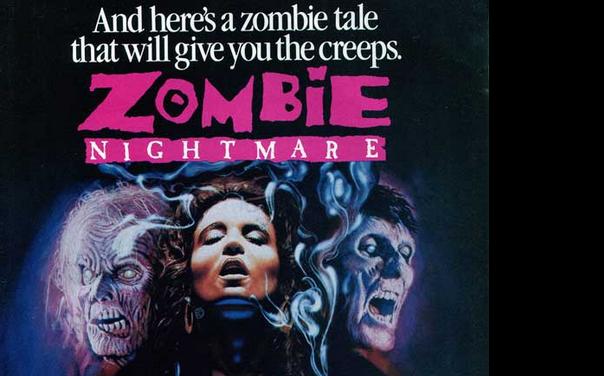 "Zombie Nightmare" is infamously terrible.  A rocking soundtrack, Adam West, Jon Mikl Thor, and to top it all off, I recently learned it was filmed around where Starkwell and Lovelock grew up, in the West Island of Montreal.  No more waiting.  Let’s rock.  Oh yeah, randomly, Tia Carrere is in it.
[...]
[Fat Dude fights street toughs.]
Starkwell: Is he supposed to be married to that old bag, or is that his mother?
Lovelock: How did he instantly bleed from the mouth like that?
Starkwell: Maybe he had a jelly donut in his mouth.
[...]
[Thor prevents a robbery.]
Starkwell: Why would he wear a tanktop that doesn’t cover his nipples?
Lovelock: Maybe he is about to run a marathon and wants to prevent nipple chafe.
Starkwell: I wonder if he’s ever been mistaken for a woman with that hair and those hooters.
[...]
[Thor is hit by car.]
Starkwell: How did he move from the sidewalk to the street like that?
Lovelock: Probably the same way that those two guys managed to wear the same outfit.
Starkwell: Seriously, what’s with the denim?  What are they in prison?
[...]
And only a few minutes later, Starkwell cried out “I’M BOOOOORED”.  Lovelock shushed him and told him that he was sure that Thor wouldn’t let us down.  Failing that, I reminded them both that it’s a short movie.  They both laughed hysterically when the Haitian Priestess had her big scene.  “Nice voice”, said the pair.
[...]
[Thor is revived.]
Starkwell: They cut his hair after he died?
Lovelock: TAKE HIS LIFE, BUT DON’T TAKE HIS HAIR!
[...]
[Two of the punks playing tennis.]
Starkwell: Rebel punks by night… Tennis players by day?
Lovelock: Holy shit!  I know that place.  That’s where my old gym was!
Starkwell: Did Thor kill people at your gym?
Lovelock: Sadly no.
[...]
Starkwell: If I was Tia Carrere, I’d be pretty embarrassed.
Lovelock: If I was Tia Carrere, I’d be FUCKING PUMPED.
[...]
[Adam West as a police Captain.]
Lovelock: Batman has a moustache!
Starkwell: Didn’t help his acting career.
Lovelock: Well, by the mid-eighties that type of moustache was reserved for porn stars.  Mostly the gay ones.
[...]
[Punk tries to rape girl in garbage pile.]
Starkwell: The garbage bags outside of an ice cream place can’t possibly smell very erotic.
Lovelock: I’m surprised that they can just leave the bags out like that.  What about racoons?
[...]
Starkwell and Lovelock talked for several minutes about how much of a dick the detective is.  And how annoying the coroner’s voice is.  And how much they wish Thor would hurry the fuck up and end this thing.
[...]
Starkwell: Why did they bother showing Thor as a kid witnessing his dad’s murder?
Lovelock: Because that’s how the hero was born.
Starkwell: No… voodoo witch made him.
Lovelock: No.  It was his Dad’s death.  Just like Batman.
Starkwell: It’s not like Batman at all.
Lovelock: That’s probably why they got Adam West, since this is basically a remake of Batman.
Starkwell: There are many levels of wrong in your statement.
Lovelock: Fucking Hollywood, and all these remakes.
Starkwell: This is the eighties... in Canada... and it's not a remake!
Lovelock: Same Bat time, same Bat Channel...
[...]
[Thor smashes guy’s head on car.]
Starkwell: You could clearly see him spitting blood at the car before his head hit.
Lovelock: Maybe he ate the same jelly donut that the fat guy at the beginning ate.
[...]
[It turns out Adam West killed Thor’s father.  And the near rape girl was actually the witch!]
Starkwell: Well I’ll be damned.  They brought it all around full circle.
Lovelock: See, now aren’t you glad you stayed all the way until the end.
Starkwell: Not particularly.
[...]
Then an impressive looking zombie flew out of the ground and killed Captain West.  It almost saved the whole film.  As the movie came to a close, Starkwell and Lovelock were partially homesick after seeing all those snippets of where they grew up.  But mostly, they were just regularsick, from having seen such a terrible movie.
Documented by Kev D. and Posted at 18:55