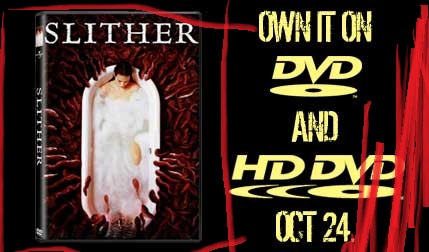 After penning a successful remake of “Dawn of the Dead”, James Gunn went on to write and direct a horror movie that, while it incorporates zombies in the mix, is more of an alien invasion story, a la “Night of the Creeps”.  I assume that “Creeps” was an influence on the film, since it goes for that same vintage feel.  Released to mixed reviews, let’s see how it mixes in the shaky hands of Starkwell and Lovelock.
[...]
[Hot blonde teacher married to creepy older dude, and he’s all creepy.]
Lovelock: See, that’s why I don’t marry men just for money.
Starkwell: Yeah, that’s why.  Wait what… ???
Lovelock: I didn’t mean that like it sounded.
Starkwell: I don’t know, I think, like the main character just said, if you had a ‘gina, you’d marry him.
[...]
The story pressed forward and as we are introduced to a multitude of characters.  The dialogue and level of acting are well above average for this type of film.
[...]
[Creepy Possessed by Alien Slug Guy buys a shitload of meat at the grocery store.]
Starkwell: That shot is oddly reminiscent of “Messiah of Evil”.
Lovelock: I think James Gunn really likes movies.
[...]
[Sketchy white trash girl is watching ‘Toxic Avenger’.]
Starkwell: Now why would a random single mother, in a trailer park, be watching a Troma movie?
Lovelock: I think James Gunn really likes movies.
[...]
While the townfolk were gettin’ drunk ‘n celebratin’ the start of ol’ deer hunting season, Grant was off shovin’ his new alien tentacles into Trailer Trash Girl and pumped her full of his alien slugs.  It was gross, but Starkwell and Lovelock didn’t seem to mind.  Especially since our hero Bill declared his hatred for hunting in general, and got to dance with Starla.  “That guy’s alright” declared Lovelock.  But then the Impregnated Trailer Trash Girl started eating hunks of raw meat, and Starkwell added, “seriously though, this is starting to get a little gross.”  Then the action picked up and Lovelock was all "SHUT UP! But also, when are we going to see some zombies?”
[...]
[Weekend Warriors hunt Grant, who is now a slimy mess of tentacles and teeth.]
Starkwell: I’m not sure what’s more disgusting, the way Grant looks, or that the old guy said “Looks like something that fell off my dick.”
Lovelock:  Let’s call it a tie, a really disgusting tie.
[Trailer Trash Girl has swollen to the size of a hot air balloon, and explodes into a bajillion alien slugs.]
Starkwell: We have our winner.
[...]
[Girl puts headphones on in tub, as slugs surround the tub.]
Lovelock: What ever happened to mini disc players?
Starkwell: Pawn shops.  Or, land fills, mostly.
[Slug takes a hold of her brain, and she sees into the collective intelligence of the alien species.]
Starkwell: …
Lovelock: I bet the aliens were smart enough to jump straight from CD to MP3 players.
Starkwell: ... ?
[...]
As the people that died from SLUG IN THE MOUTH started reviving as flesh eating zombies, and the action picked up times a million, Lovelock leaped up from the couch and started doing roundhouse kicks all in the air while Starkwell sat and praised the witty banter between the characters.  It was a weird sight.
[...]
[Weird zombies merge into tentacle creature Grant and form some sort of super blob.]
Starkwell: So fucking gross.
Lovelock: Seriously, it’s all “Kaneda... HELP MEEEEEEEEEE...” Except real.
[...]
Pod people, weird reptilian creature shit, zombies, the blob, coming of age story, good dialogue, solid acting and great effects make for one big pot of AWESOME.  Starkwell and Lovelock just started the movie over again and I think I’ll just watch this time instead of writing down what they say.
Documented by Kev D. and Posted at 20:45