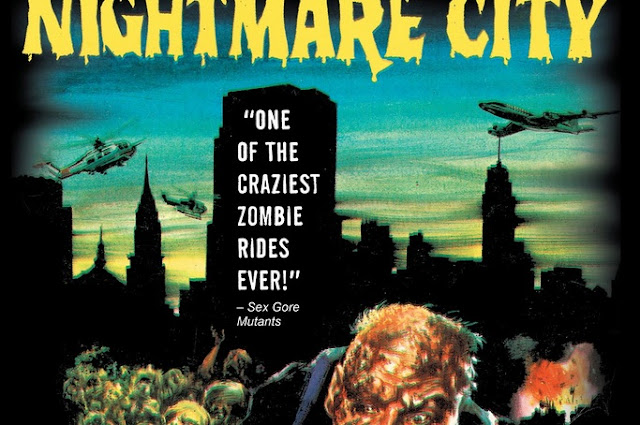 Italian cult director Umberto Lenzi dove head first into the zombie exploitation genre with his explosively insane 1980 explosion, “Nightmare City”.  He didn’t care about zombie rules.  He didn’t care about good taste.  He didn’t even really care about logic or sense.  Let’s see what Starkwell and Lovelock have to say about this epic and infamous venture into ridiculousness.  EXPLOSION.  The DVD from Blue Underground looks spectacular, by the way.

[Plane full of zombies lands on runway, they raise hell.]

Starkwell: Which one of the zombies was flying the plane… and landing it?

Lovelock: Probably the Queen zombie.  In these situations, it’s best not to ask too many questions.

The whole thing is filmed almost like a slapstick comedy.  Whether or not it was intentional will probably forever remain a mystery.  Either way, Starkwell and Lovelock’s explosive laughter indicate that it doesn’t matter.  The laughter went on.  And on. And on.  This is what I was able to understand, through the thick laughter and tears.  I am not kidding… TEARS.

Starkwell: Is that a zombie or a guy with mud on his head?

Lovelock: How come some of them are eating people and others are basically ninjas?

Starkwell: Is that guy holding a mop?

I know there were more awesome jokes in the mix, but I couldn’t tell what they were saying.  Also, I was laughing pretty hard too.  Then it cut to a dance show being filmed in the television studio, and I swear I thought Lovelock was going to have a heart attack he was laughing so hard.

Starkwell: Why are the camera men wearing lab coats?

Starkwell: Why is he so pissed off?  How many people would have been watching that shitty dance program?

Lovelock: Italy in the early eightes?  Probably a lot.

Starkwell: Why is it in slow motion?

Lovelock: Because it’s so fast paced, you just might miss something otherwise.

Starkwell: Well, I wish I hadn’t seen that zombie cut off that woman’s breast and eat it.

Lovelock: You don’t get to choose what you see.  Umberto is in control.  Give in.

None of the film makes sense.  Some of the highlights from the next thirty minutes of laughter were as follows.

Starkwell: Why would the colonel introduce himself by name like that, to his fellow officers?

Lovelock: It’s so that we, the viewers, know who he is.

Starkwell: Given how many zombie ‘rules’ it throws out the window, it really is sticking to the “destroy the brain” theory.

Starkwell: I don’t think Umberto cared much about the audience either.

Starkwell: I can’t tell if they’re zombies or some kind of terrorist group wearing mud for camouflage.

Lovelock: If they are worried about camouflage then that baby blue leisure suit is a poor choice.

Starkwell: It worked well at the dance studio.

The action, for the most part, is pretty relentless.  No one is safe.  Especially not Starkwell or Lovelock.

Starkwell: Luckily for the main character’s wife, the zombies, when pursuing her, are incredibly slow and decide not to use machine guns or swords.

Lovelock: The zombie speeds are inconsistent, much like the amount of mud they have on their faces.

Starkwell: Did the doctor just hit a zombie with a plastic water bottle? It didn’t look like the stunt man even knew he was hit.  And how come the surgeon can throw the scalpel with such accuracy?

Lovelock: Surgeons used to often double as circus performers, or, professional dartsmen… dartists… dart throwers… whatever that would be.

Starkwell: Why would the zombie expose that woman’s boobs before hitting her with… was that a baseball bat?

Lovelock: Did you see the size of those things?  I’m surprised they didn’t fall out sooner, or explode on impact.

The conversation continued like this for a little while longer.  Starkwell and Lovelock kept on having to rewind just so they could make jokes about everything that was happening on screen.  I believe Lovelock was the one that exclaimed that “the hospital KILL montage was the best montage of the movie so far”.  I couldn’t keep up with them, let alone the frantic action happening within the film.  I think it was Starkwell that said, at one point, quite matter of factly that, “this might be the highest body count I have ever seen in a movie.”

Lovelock: It’s kind of souring me on nipples.

Lovelock: Well… no.  But, definitely soured on that girl’s nipples.

[Reporter’s wife starts freaking out and he slaps her to ‘snap her out of it’.]

Lovelock: You really don’t see that much any more.

Starkwell: In film or in real life?

Lovelock: Shit, both, I hope.

Lovelock: Is that a field full of zombies or a flash mob?

Lovelock: A field full of zombies or a disorganized rugby game?

Lovelock: That’s why I don’t go to church.

Then the Reporter and wife end up AT AN AMUSEMENT PARK, where they are eventually rescued by a helicopter.  But then, Wife slips and falls and dies.  The shot of her falling is, for lack of a better word, ridiculous.  It has never been more obvious ever, in any movie ever, that it was a dummy falling, and not an actual person.  Not ever.  The lack of a face and the terrible wig really gave it away in this case.  Also that the arm fell off.  But then… Reporter wakes up, and it was all just a horrible dream.

[Reporter goes to the airport to interview a Nuclear Scientist guy.]

Starkwell: This all looks strangely familiar…

Starkwell: Is the movie starting over?

Lovelock: Man, I hope that in the theatres they ran a director’s cut that just ran forever.

Starkwell: Yeah, like a social experiment, to see how long people would last.

Lovelock: I think I could do a day or two.

THE NIGHTMARE BECOMES A REALITY…

Sometimes movies are so bad that they are good.  But on rare occasions, such as with this cinematic gem, films are so unbelievably bad, that they are elevated to a level of mischievous fun far beyond the scope of comprehension.  This many wrongs couldn’t possibly make a right, could they?  I can’t even tell you why Starkwell and Lovelock liked this movie so much.  To be honest, I don’t even think that they could tell you.  People believe in God without having proof of its existence, and I guess Starkwell in Lovelock believe in the sheer brilliance of this movie, even without the proof of its existence.
Documented by Kev D. and Posted at 13:30