I Eat Your Skin. 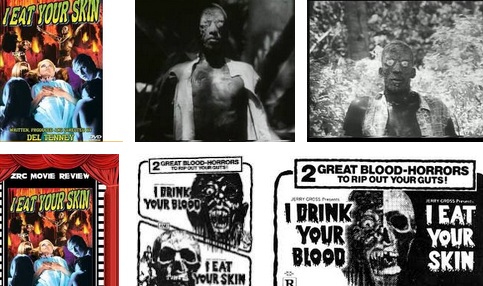 Although Del Tenney wrote, directed, produced and completed the film sometime in 1964, this film wasn’t actually released until about 1971.  Its original title was “Zombie”, but was changed to “I Eat Your Skin” because it was tagged onto the release of “I Drink Your Blood” for a whoppingly poor double feature.  Delaying it by six or so years, completely changing the name, and combining it with an unrelated film, should be an indicator of what the studio thought of this movie.  Imagine what the audience thought.  Let’s see what Lovelock and Starkwell will think.
[...]
[Girl stripped to bra and panties, performs interpretive voodoo dance.]
Starkwell: It’s gonna be a long night.
[Enter a goat.]
Lovelock: I think the night is about to get a lot shorter for that goat.
[...]
[Novelist is surrounded by groupies.]
Lovelock: In the sixties, the novelist was king.
Starkwell: Really?
Lovelock: No, I think it was the Beatles and other rock stars, this movie is dumb.
[...]
[Agent wants Novelist to go to Voodoo Island.]
Starkwell: Why would anyone ever go to a place called Voodoo Island?
Lovelock: Apparently because there are loads of virgin girls there.
Starkwell: He’s supposed to be the hero?
[...]
[Coral yells at her husband, the agent.]
Starkwell: If that’s her actual voice, I think she should have been dragged out back and shot a long time ago.
Lovelock: “What’s the explanaaAAAaaaation??!?!?”
Starkwell: “Would you bring me a banaaaAAana or something?”
Lovelock: “Get a load of tubbo.”
[...]
We actually started to see zombies in the film earlier than Lovelock or Starkwell had expected.
[...]
[Bug-Eyed zombie walks through trees.]
Lovelock: So many branches hitting his face!
Starkwell: Those poor actors probably couldn’t see with all that shit on their eyes.
[...]
They can’t tell if Coral is supposed to be here for comic relief.  All they know is that they hate her.
[...]
[Novelist sneaks up behind girl playing piano, sits on chair smokes cigarette and starts clapping.]
Starkwell: So creepy.
Lovelock: And yet, his rapist charm is working on her … ??
Starkwell: Who lets a creepy guy they just met mix a drink for them?
Lovelock: Most likely, girls that turn up dead later.
Starkwell: Were all women in the sixties as loose as this movie portrays them?
Lovelock: Maybe in Del Tenney’s dreams.
[...]
Lovelock: There is a distinct lack of skin eating for a movie that claims it will eat mine.
[...]
Starkwell: I love that they have the characters say “LOOK AT THAT MOON”, so that we know that it’s supposed to be the night time.  Since it clearly is shot in the middle of the day.
[...]
Lovelock: This movie should have been renamed “I Bore Your Brain”
Starkwell: Not bad…
Lovelock: “I Lose Your Interest”?
Starkwell: Better…
Lovelock: “I Waste Your Time”.
Starkwell: That’s the one.
[...]
Lovelock: Well at least the dance ceremony is incredibly long.
[Sarcasm… I hope.]
[...]
[Zombies kidnap girls.]
Starkwell: Well I guess they gave up on finding virgins if they settled on those two tramps.
Lovelock: Are those zombies, or people with mud masks and cucumbers on their eyes?
[...]
[Dance ceremony.]
Lovelock: Again?
Starkwell: That is totally the same footage as the last time.
[...]
Lovleock: Why would you equip a computer with a huge flashing DANGER sign?  … it’s like you’re asking for danger.  You’re literally assuming danger will happen enough to warrant making half of the computer a flashing DANGER sign.  That’s just bad design.
[...]
After a predictable twist and an escape from the island sequence, the movie ended and Starkwell and Lovelock both immediately said that they already forgot what the movie was about.  I’m pretty sure that isn’t a stamp of approval.  There was a sweet shot of a native island guy being shot with a flare gun and flying off the back of a speeding boat.  It wasn’t worth sitting through seventy-five minutes to get to it, but I’m pretty sure the stunt man probably drowned during filming.
[...]
Lovelock: Still, I kind of wish I was a novelist in the sixties…
Documented by Kev D. and Posted at 11:05