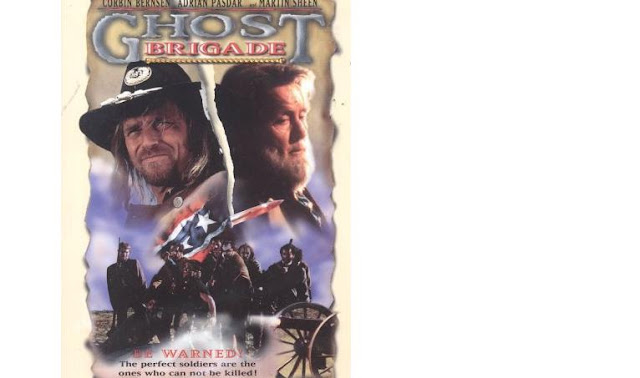 If I told you there was a film starring Martin Sheen, Billy Bob Thornton, David Arquette, Matt LeBlanc and Corbin Bernsen, about a band of zombie soldiers during the civil war, you might think I was making it up.  Well, I’m not.  Starkwell and Lovelock are about to embark on a journey deep into forgotten pockets of some relatively well known actors’ careers, and I get to write down some of what they have to say about it.  Welcome to 1993’s “Ghost Brigade”.
[...]
Starkwell: Full screen?  That screams straight to video to me.
Lovelock: Or made for TV.
[...]
[Martin Sheen as a Union general.]
Starkwell: Man, who did he owe a favor to for this?
Lovelock: Performance – PHONED IN.
Starkwell: Isn’t that the guy from ‘Heroes’?
Lovelock: I wonder how many careers this movie started…
Starkwell: I’m actually starting to wonder how many it ended.
[...]
The plot pressed forward.  It was a decent story, but when played out with this budget, costumes from a Halloween store, sets from a community theatre troupe, and this sad display of both over acting and under acting, it was clear that it was going to fall short, no matter who is in the cast.  Still, Starkwell and Lovelock paid attention, laughing loudly at Corbin Bernsen’s boobies.
[...]
[Enter the zombie platoon.]
Starkwell: That is either the worst zombie makeup ever, or the lamest war paint ever.
Lovelock: Either way, I hate them.
[Billy Bob Thornton dies.]
Starkwell: Killer amount of screen time there, Billy Bob.
Lovelock: I guess he was still an up and comer.
Starkwell: I wonder how much this movie delayed him.
[...]
Then Billy Bob returns as a zombie, and recruits DAVID ARQUETTE, but too late, Arquette just blew his brains out.  They agreed it was the best Arquette has ever been.
[...]
[Guy plays a Jew’s harp.  We hear it for the next twenty minutes.]
Lovelock: I knew a guy who chipped his tooth on one of those.
Starkwell: Really?
Lovelock: Probably.
[...]
[Bernsen’s nephew is killed in a flashback.]
Starkwell: Twelve year old nephew? I thought that was a thirty year old woman.
Lovelock: What was the point of the drummers in the platoon anyways?
Starkwell: It seems like it was to draw enemy fire.
Lovelock: Seems like a pretty shitty job.
[...]
Then Bernsen dove into a puddle head first and came up in a mysterious cave with his zombie nephew.  Starkwell and Lovelock still aren’t sure if it’s a young boy or woman, but they both agreed that his voice was awful, and had trouble listening to his incredibly long monologue.  It was around this time that they both REALLY started to lose interest.  Between the cheesy monologues, the out of place homosexual themes between Bernsen and 'Heroes' Guy, and the schizophrenic cuts, it was really tough to blame them.
[...]
[Colonel comes back, but HE’S ONE OF THEM!]
Starkwell: That was the most obvious twist ever.
Lovelock: Wait.  It’s a trap.  Get an axe.
[Colonel is set on fire.]
Starkwell: That was the least dramatic ‘Man being set on fire’ I have ever seen.
Lovelock: This movie BLOWS.  Please end.  Now.
[...]
Starkwell: Why is Billy Bob Thornton smiling so much?
Lovelock: Probably because this was still a step up from “Chopper Chicks in Zombie Town”.
Starkwell: Was it though? Was it?
[...]
[Bernsen is ‘stabbed’.]
Starkwell: The whole ‘sword under the armpit so it looks like you’ve been stabbed trick’?
Lovelock: Yeah… that trick didn’t even look good in Elementary school plays.
Starkwell: What the fuck kind of school plays were you involved with?
Lovelock: Ones better than this movie...
[Lovelock runs away.]
The movie ends.  Hooray.  Let’s just remember that, apparently, Hickenlooper was mostly known for his documentary work.
[Lovelock comes back.]
Lovelock: Wait, where was Joey Tribbiani?
Starkwell: Maybe he skipped it for his 'Friends' audition.

Lovelock: I think he made the right call.
Documented by Kev D. and Posted at 21:00