Garden of the Dead. 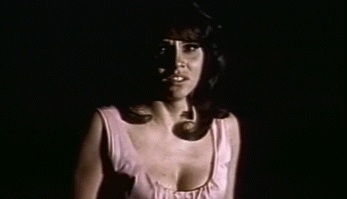 So I put the fucking Troma DVD into the DVD player, and there isn’t even a menu.  They force me to watch a bunch of Troma promo shit, and then it just launches into 1974’s “Garden of the Dead”.  Sit back, Starkwell and Lovelock, relax, and try to find some effective ways to make fun of this thing.

[Prisoner Gang gets high off of some kind of formaldehyde vapor.  The Formaldehyde Gang.]

Lovelock: I don’t know, prison doesn’t look so bad.  Working outside with your buddies, getting’ high.  It’s a party.

[The prison camp pretty much looks like a summer camp.  Girl in super short skirt arrives.]

Lovelock: AND there are girls?!?

Starkwell: I think I’d rather not see that guy rubbing his dickprint.

[Guard lets guy out to see his girl and kiss her.]

Lovelock: Dude’s in prison and he gets the girl!?!?!

Starkwell: If this is at all representative of our prisons, then I’m thinking the guards need to be a little tougher.

[Inmates play poker and smoke and hang out.]

Starkwell: And that’s why, prison sucks.

Lovelock: Well, that and the showers.

The incredibly dark and poor quality of the print made it hard to figure out exactly what was going on, but basically The Formaldehyde Gang were escaping and were mostly shot dead.  I think some formaldehyde was leaking into a graveyard.  At some point I think Lovelock said “Fuck, turn the lights on”.  Starkwell was WISHING for some solid DAY FOR NIGHT filming.

[The Formaldehyde Gang rise from their graves.]

Starkwell: You can see what’s going on? Man, I can’t see anything.

Lovelock: She might have the most excruciating scream I have ever heard.

Starkwell: Regardless, I think we got the point after the first five seconds.

Lovelock: The zombie makeup is better than I expected.

Starkwell: This film’s pace is exactly as I expected.  Slow.

[Skirt Girl drives away from the zombie in her trailer.]

Lovelock: Escaping zombies while staying at home… the one major advantage to living in an RV.

Starkwell: Lack of proper toilet is definitely a disadvantage.

Lovelock: But it’s good training for the apocalypse.

The Formaldehyde Gang comes back to drink their beloved formaldehyde, and then move at ridiculously fast speeds in a frenzy of rage.  Both Lovelock and Starkwell agree that the movie would be infinitely cooler if they could see half of what’s happening on the screen.  But there an awful lot of ninja like acrobatics coming from axe wielding zombie convicts.  And then the zombies start getting shot and melting or something.  One jumped out a window, and there was a simultaneous “WOAH” from the peanut gallery.

Starkwell: So, what did you learn today?

Lovelock: Huffing formaldehyde and prison are not as fun as they might seem in the first twenty minutes of this film. You?

Starkwell: That I can’t get back the last hour of my life, and that lighting in a movie is important.

So there is this thin plot line that involves the zombies being hurt by light, but somehow, not all light hurts them, and moonlight doesn’t affect them.  It seems like it’s just the big spotlight.  Starkwell suggests that it’s some sort of psychological twist, because as escaped convicts, they do not want to be seen by the guards’ spotlight.  Lovelock seemed intrigued, but then Starkwell was like “nah, I’m kidding, this movie blows”.  Then the zombies get shot and THE END.
Documented by Kev D. and Posted at 20:52