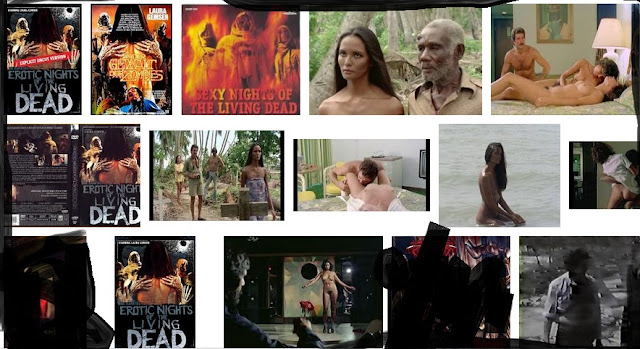 The year was 1980, and with every Italian director under the sun putting out their own zombie splatterfest, seasoned pornographer Joe D’Amato decided to take it up a notch with his “Sexy Nights of the Living Dead”, and include hardcore sex scenes in it.  As we all know, when most people think rotting flesh and cannibalism, they think EROTIC AND SEXY.  This one will be a challenge.
[...]
[Funky music plays while creepy guy wanders through asylum, following nurse.  He finds her banging a dude, and then starts furiously jerking off.]
Starkwell: I’m giving this movie five minutes before I walk.
Lovelock: Hey, at least they haven’t shown penis yet.
Starkwell: When the best part of a movie is that it hasn't shown me a penis, it's time for a new movie.
[...]
Then two floozies went into a shower with a dude and his floppy dong and once it was clear that D’Amato was going to focus a lot of screen time on this floppy ol' dong, Starkwell left and assured us that he would not return.  As he was leaving, a guy was eaten by a zombie.  I think Lovelock asked him to reconsider, but Starkwell said something along the lines of “I can’t do it… dude, I just can’t do it.”
[...]
Lovelock: They focus on the zombie for five seconds, but then we have look at this guy’s fucking taint for ten minutes?  Jesus, are those warts?  I’m gonna be sick.
[...]
Lovelock left to go vomit up the feta cheese he was eating, but he said he would be back.  I told him to take his time, since it looks like we are heading towards several more sexual interludes, at least one involving Moustachio McWarty Taint.
[...]
Somewhere just past the thirty minute mark, Lovelock talked a little about how nothing at all was happening, and that so far the movie could have been edited down to about thirty seconds.  Then a girl popped a champagne bottle open with her vagina and he had to leave to throw up again.
[...]
[Moustachio McWarty Taint tells girl that he wants to screw again, she says “Not again”.]
Lovelock: Shit, I know exactly how she feels.
[...]
There were frequent random shots of a cat, that seemed to be living in the Captain’s mind, and it really freaked him out.  Lovelock couldn’t resist the urge to say “They sure do show a lot of pussy in this movie.”  He said it right before a lesbian scene, which made it hit home that much harder.  Then the DVD started skipping, and Lovelock said if it stops, he’ll take it as a sign from above that he shouldn’t have to finish this awful film.
[...]
Lovelock: Forget “Sexy Nights of the Living Dead”… It should be called “Non-Sexy Nights of Moustachio McWarty Taint’s Dirty Balls”.  It’s been over an hour, we’ve only seen two zombies.  We've seen as many testicles as we have zombies.  I should never be able to say that about a movie.
[...]
At one point some things, let’s call them zombies, emerged from the jungle, and the Captain scared them off with a stone that looks like it came from a hotel gift shop.  With about twenty minutes left in the movie, we finally start seeing some zombies, also, an awesome CAT ATTACK!
[...]
[Zombie is stabbed, creamy brown liquid comes out.]
Lovelock: In Italy, zombies have café latte for blood.
[...]
[Moustachio’s dong is bitten off by evil spirit girl.]
Lovelock: Well, at least we won’t have to see it anymore.
[...]
Lovelock fell asleep during an INFINITY long sequence of people rising from graves and slowly walking after our characters.  He woke up screaming saying something like “THE BALLS ARE COMING.”  But then he realized the film was over and was overwhelmed with relief.  Half of the movie was basically a bad porno, half of it was a bad zombie movie.  Unfortunately for Lovelock, when you put those two halves together you get an awful fucking movie.  One of the worst ever.
Documented by Kev D. and Posted at 20:45