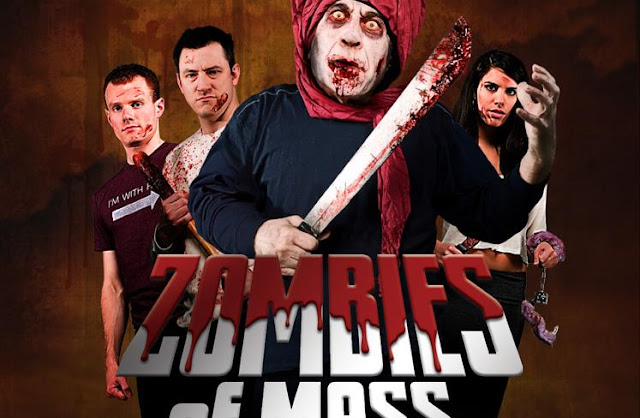 “Zombies of Mass Destruction” might be the dumbest movie title that I have heard in a long time.  On top of that, the box for this 2009 zombie entry displays a quote that makes a comparison to “Shaun of the Dead”, which only raises the bar much higher than this film can likely go.  Luckily, Lovelock and Starkwell never judge books by their covers, and sit patiently waiting for me to play the damn movie.
[...]
[Blind guy pokes a beached zombie and gets eaten.]
Lovelock: That’s why I never poke things with my blind guy walking stick.
Starkwell: Yeah, that’s why.
[...]
As the not-so-subtle political agenda of the film unfolds in a rather 'in your face' fashion, Starkwell can’t help but notice the above average quality of the dialogue and acting.  Lovelock is just writing down a list of characters he can’t wait to see get killed.  It’s already a fairly long list.
[...]
[Tom’s Mom was bitten earlier that day.]
Starkwell: Well, don’t get too attached to the mom…
Lovelock: Thankfully!  She was definitely already on my short list.
[...]
Lovelock was about to write ‘Singer-Songwriter Boyfriend Guy named Derek’ on his list a SECOND time, but then he was eaten REAL HARD and Lovelock’s list burst into confetti.
[...]
[Mom’s eyeball pops out and she eats it.]
Starkwell: That eyeball gag felt a bit forced.
Lovelock: 'Forced eyeball gag' trumps 'no eyeball gag'.  Film one, Starkwell zero.
[...]
[White Trash Dad interrogates and tortures Iranian-American Frida because he thinks she is a terrorist.]
Starkwell: Wait… he’s originally from Canada?
Lovelock: That a Canadian would behave like that might be the most unrealistic part of this movie so far.
[...]
Zombie mayhem continued and our heroes (the gay couple) end up stuck in the church with nutty people.  Pastor Crazybrain gives a sermon to a few crusty old people on how liberal pro-choice homos brought on Judgement Day.  Lovelock and Starkwell weren’t sure whether to laugh, cry, or ask for fast forward to be pressed.  Somewhere in between Tom and Lance escaping the Church’s De-Gaying machine, Mayor Zombie eating Pastor Crazybrain and the Pacifist Teacher Lady becoming trigger happy, I distinctly heard Starkwell ask “are we there yet?”
[...]
[National Guard comes, quarantine ends, life is normal again.]
Starkwell: That is the worst looking soldier I’ve ever seen.  Why did they put “29 Weeks Later”?
Lovelock: I know.  It kind of makes the whole movie feel like a Weird Al song.
Starkwell: The villagers aren't really making a very big deal out of the fact that it’s all over and done…
Lovelock: Oh, I don’t know, I mean, they made t-shirts…
[...]
Starkwell and Lovelock found this movie to be perfectly adequate.  That is all.  Better than most, much worse than lots, fairly okay in general.
Documented by Kev D. and Posted at 17:45