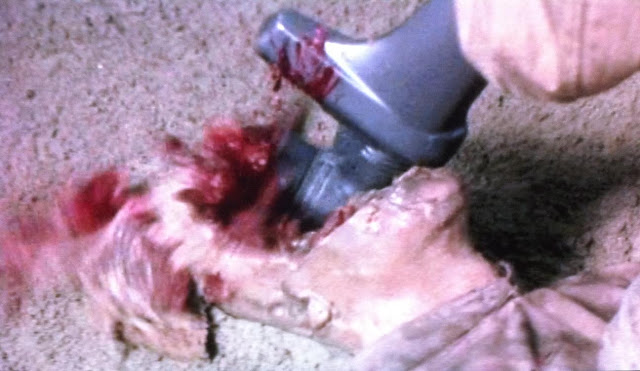 This DVD doesn’t even have a menu.  When I put it in for Starkwell and Lovelock to watch it just automatically stopped after the FBI Warning.  Maybe it was a sign to abort the mission, but for some reason, I pressed play again.  This is going to be a rough one.  Lovleock asked “It’s 1980, and Ian McCulloch is in it… how bad can it be?”  Just wait, Lovelock.  Just wait.
[...]
[Girl strips.]
Starkwell: Holy shit, who matches their furniture with their lampshade, bedspread and wallpaper?
Lovelock: The same women that walk around in a bra and panties while tending to their fridge full of raw meat.
[...]
[Hospital worker tries to take a bite out of a dead guy’s heart, gets caught, jumps out window.]
Lovelock: I don’t think that’s what those people had in mind when they donated their bodies to science.
Starkwell: The arm flew off the dummy when it hit the ground, and yet, when they showed the dead character after, his arm was still attached.
Lovelock: Dude, mannequins aren’t cheap.  That was the best take they had.
[...]
For a while, Lovelock and Starkwell weren’t really paying any attention.  They perked up a little when McCulloch was on screen, but mostly they were amazed at the amount of random shots there were of New York City.  At one point, Starkwell blurted out, “yeah, we get it, you’re in New York.”  Soon, the director upgraded to STOCK FOOTAGE of a random tropical island, which could have been lifted from any other number of zombie movies from the era.  Lovelock noticed that their car changed from one shot to the other.
[...]
[Naked Girl finds Maggoty Head in her bed.]
Lovelock: That’s why you should always wear pants to bed.
Starkwell: Yeah, that’s why.
[...]
[Cannibal Tribe randomly show up and eat kid.]
Starkwell: They’re standing right next to them, why would McCulloch need those enormous binoculars?
Lovelock: Probably for the same reason that the reporter girl’s camera keeps changing colors.
Starkwell: Not bad.
Lovelock: Probably for the same reason that the hardcore Black dude wears a pink scarf and carries a machete ALL THE TIME.
Starkwell: Better.
Lovelock: Probably for the same reason that the Cannibals use shiny red silk ribbons to lasso people in for the kill/eat.
Starkwell: That’s the one.
[...]
The excessive gore doesn’t seem to be enough to win even Lovelock over.  Somewhere well past the halfway point, we eventually see some zombies.  They just sort of stand there looking gross.  Still no sign of a holocaust.  Still no sign of a plot.
[...]
[They all sit around drinking cans of soda pop.]
Starkwell: Where did they get the soda?  And is that a box of ‘Special K’ in the bag?
[...]
[BOAT MOTOR CHARGED INTO ZOMBIFACE.]
Lovelock: I think we definitely just hit the film’s high point.
Starkwell: They should have just ended it right after motor-kill.
Lovelock: From now on, whenever someone runs a boat’s motor into someone’s face, we’ll say that they got McCulloched.
Starkwell: Probably won’t come up that often, especially since we’ll never watch this one again.
[...]
Reporter girl became a zombie with bad teeth, but then they ripped her scalp off, and suddenly she was on the Doctor’s autopsy table wearing a bloody bald cap and her teeth and face were back to normal.  Starkwell gave up and went to bed.  Lovelock kept watching, hoping that McCulloch would find another working motor on an abandoned boat.  He never did.  The Blonde girl did get naked, though.  Again.
[...]
[Blonde girl’s naked body gets flowers painted on it.]
Lovelock: It looks just like her wallpaper from the beginning.  I think that must mean something.
Starkwell: It means this movie sucks.
Lovelock: I thought you went to bed.
Starkwell: I wanted to make sure that you threw the movie out the window after it’s over.
[...]
The movie ends, and they weren’t really sure what happened.  Well, at least the blonde girl found some clothes.
Documented by Kev D. and Posted at 23:00