Return of the Living Dead. 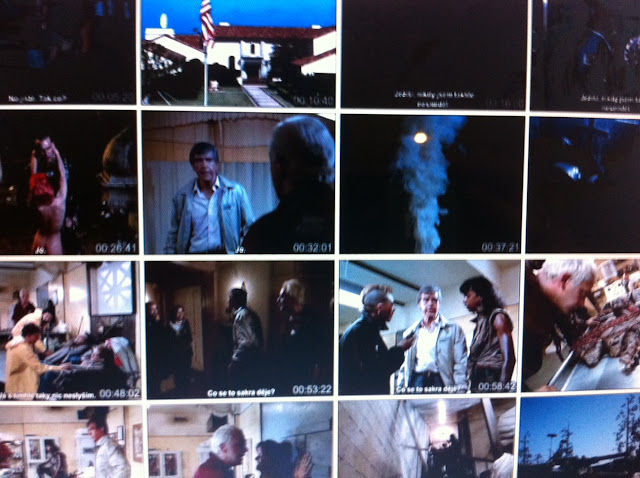 John Russo who was behind the original Night of the Living Dead, along with Romero obviously, apparently had the right to use the “living dead” moniker however he saw fit.  In 1985, he decided to use said moniker in his story turned movie “Return of the Living Dead”.  Dan O’Bannon, yes THE Dan O’Bannon, was brought in to write the script and direct, and the result was a horror comedy the likes of which had never been seen!  And now it’s time for Starkwell and Lovelock to see it!  NOW!!!!!
[...]
[Film says the film is based on true events.]
Lovelock: Wow.  The ‘80s really were a magical time.
[...]
It is evident right away that the Dan O’Bannon magic is in full effect, and that the acting is top notch.  Lovelock was so excited he let out an accidental fart.
[...]
[Old Guy slams Trioxin container and it leaks.]
Lovelock: That’s why I never slap the side of Conspiracy Containers.
Starkwell: Yeah, that’s why. ... Wait, what's a Conspiracy Container.
Lovelock: A barrel full of secret stuff and mystery that the government wants to hide... duh.
[...]
The movie is full of hilariously over the top army people, 1980s style anarchy goth punks, and synth music.  Then dead things started coming to life and Starkwell and Lovelock sat at the edge of their seat, smiling and laughing, thoroughly engaged.
[...]
[Punk girl strips.]
Starkwell: Why would she strip?
Lovelock: To stick it to the man?
Starkwell: Try again.
Lovelock: So that the movie could feature boobies?
Starkwell: Bingo.
Lovelock: Even Dan O’Bannon can't escape the '80s gratuitous booby movement.
[...]
After the frantic and funny fight with the first zombie, Starkwell agreed to forgive O’Bannon for the gratuitous female nudity.  The zombie was running, which, at the time must have been pretty original, and sacrilegious, for any Romero purists.  Starkwell and Lovelock don’t seem to have any problem with it.
[...]
[Embalmer pulls out a pistol.]
Starkwell: Why would the guy working at the mortuary have a gun?
Lovelock: Apparently, one reason would be to kill rabid weasels out in the parking lot.
[...]
[Toxic rain covers the graveyard, punks flee the scene.]
Starkwell: Why wouldn’t she take her clothes?
Lovelock: So that they can continue to show her boobies.
Starkwell: Yeah, I’m mad at O’Bannon again.
[She eventually covers her top partially, but continues to parade around with no pants.]
Starkwell: …
Lovelock: I feel like wearing a top with not bottom only accentuates the bottom's nudity.
Starkwell: ...
[...]
[TARMAN makes his appearance.]
Starkwell: Holy shit that’s an impressive make up job.
Lovelock: Shut up RIGHT NOW, until I tell you it’s ok to speak again.
[...]
Starkwell and Lovelock were quiet for a while as the story progressed into a frenzy of fast moving zombies and a motley crew of panicky people stuck in a mortuary.
[...]
[Zombies can talk, apparently, and use the ambulance radio to communicate with dispatch.]
Starkwell: I’m not sure how I feel about that…
Lovelock: I don’t remember saying that you could talk yet.
[...]
There was a scene where two paramedics show up and get swarmed INSTANTANEOUSLY.  They made me rewind it five or six times.  In fact, there were so many amazing shots that they wanted to re-watch that I had to hide the remote, or it would have taken three hours to get through this thing.
[...]
[Naked girl returns as a zombie.]
Starkwell: Fucking COME ON.  There is no reason for her to be naked.
Lovelock: Dude, we’ve been over this.  It is for the inclusion of film boobies.
[...]
The rest of the movie moves fast.  It succeeds on every level.  When it wants to be funny, it’s funny.  When it tries to scare, it delivers.  When it wants to gross out, it does so magnificently well.  Starkwell actually admit to liking the characters.  Well, except the naked girl.  Both Starkwell and Lovelock want to watch the many sequels that this film spawned.  I guess I will let them find out for themselves that none of the follow-ups come anywhere close to this film’s quality and charm.  Sure, we could have done without the gratuitous boobs, but if that’s the movie’s one major flaw, we’re doing just fine.
Documented by Kev D. and Posted at 21:55