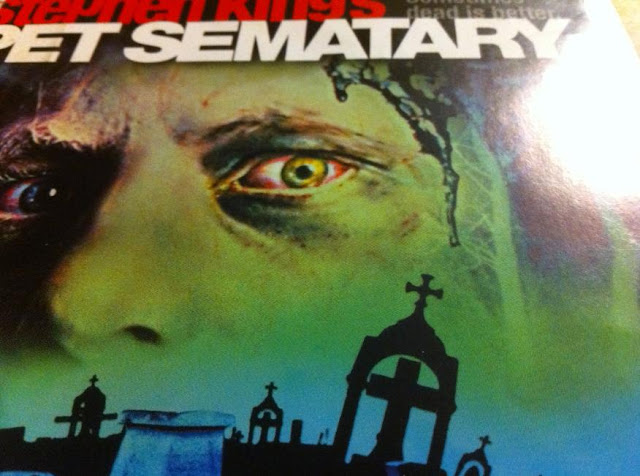 Stephen King really pisses me off.  How can anyone just come up with so many damn stories?  Amidst all of his best selling books, he also wrote screenplays.  Some originals, some based off his books.  He even got to collaborate with Romero!  Anyways, I’m pretty sure this one is about cats.  And it was directed by the woman that directed Madonna’s “Like a Virgin”, so you know it should be pretty scary.  Lovelock hopes I’m joking about the whole ‘it’s about cats’ thing.  We’ll see.
[...]
[Introducing the family, and their new New England home. Tire swing breaks, girl falls.]
Lovelock: That’s why I never swing on tire swings.
Starkwell: Yeah that’s why.
Lovelock: Isn’t that the 'girls have a penis boys have a vagina' kid from "Kindergarten Cop"?
Starkwell: I’m pretty sure you’ve got that backwards.
Lovelock: I'm pretty sure you're backwards.
Starkwell: What?
Lovelock: IT’S NOT A TUMOR.
[...]
They eventually got into a deep discussion as to why they would be so trusting of a random old crotchety dude from across the street, also, why they had to make the little girl so unbelievably annoying.  I think they repeated the line “LOOK DADDY THIS ONE’S A GOLD FISHY” about twenty times.  Considering how much he didn’t want this to be about cats, Lovelock certainly kept mentioning how cute the cat is.
[...]
[Girl says “yay”.]
Starkwell: No one should ever say ‘yay’ that loudly.
Lovelock: The last person who did was probably thrown out of a window.
[...]
Sometime after this, things started to pick up a little in the scary department and there was a fairly creepy "dream / or was it a dream?" sequence.  Starkwell and Lovelock went quiet.
[...]
[Cat is dead, hit by truck.]
Lovelock: That’s why cats should stay indoors.
Starkwell: Yeah that’s why.
Lovelock: …
Starkwell: Oh, actually, yeah, that is why.
[...]
Both Starkwell and Lovelock laughed out loud for several minutes when the Old Man Jud and Doctor Louis heard a horrible haunting scream of some kind in the forest on their hike, and Old Man says “Just a Loon, that’s all”, and the Doctor buys it.  Way too much trust is being put into the creepy Old Man Jud.
[...]
[Zombie Cat.]
Lovelock: Much cuter than I would expect a zombie cat to look.
Starkwell: If a truck actually hit that cat, I think it would have exploded.
[...]
[Flashback to Wife Lady and her monster sister Zelda.]
Starkwell: Well, I’m not eating supper tonight.
Lovelock: Just tonight?  I think that ruined my week.
[...]
[Kid dies by truck.  At the funeral Father in Law punches Doctor Louis, coffin falls over.]
Starkwell: I would straight up kill the Father-in-Law.
Lovelock: I don’t know, he has a point, who the hell was watching the kid?
Starkwell: Dude…
Lovelock: Anyways, how could there be anything in the coffin?  Wouldn’t the kid have blown up when that truck hit him?
Starkwell: Dude!?!
Lovelock: Man, that’s what you said about the cat.
[...]
I lost track of what they were saying, because Old Man Jud started telling the story of Timmy Baterman and Lovelock started making jokes about Timmy Baterman could have a butler who would have to call him Master Baterman.
[...]
[Daughter tells Wife Lady about her PAX COW dream.]
Starkwell: So, she hears 'Pax Cow' and figures out everything?
Lovelock: Meanwhile the Doctor Stupid brings his surprisingly intact dead child to the MicMac burial ground… AGAINST ALL WARNINGS.
[...]
Wife Lady passed a neon lobster sign and spent the next five minutes talking about Maine lobster.  Meanwhile “boys have a penis” kid comes back and starts tearing the place up, much to everyone’s delight.  When he offs Old Man Jud, Lovelock readily admit that he “totally breaks my unwritten rule that zombie children can’t be cool.”
[...]
[Wife Lady sees Zelda.]
Starkwell: Please… no more of the disgusting sickly tranny sister from the past…
Lovelock: Seriously… Oh wait, it’s just Zombie Kid… SCALPELLED!
[...]
Doctor Moron grabbed the cat and injected him with something, and it is clear that it’s a real cat that they hopefully just tranquilized.  After finding, killing and burning his psychotic super powered evil zombie kid, he decides that it’s STILL a good idea to bury his wife in the MicMac Paddywhack, thus making him one of the dumbest characters ever.  Depressing ending, roll credits, Starkwell and Lovelock agree, great movie, if you really want to feel like shit.  Thanks a lot, Stephen King.
[...]
Lovelock: Ew!  He totally slipped her the tongue and got eyeball puss all in his mouth.
Documented by Kev D. and Posted at 18:05