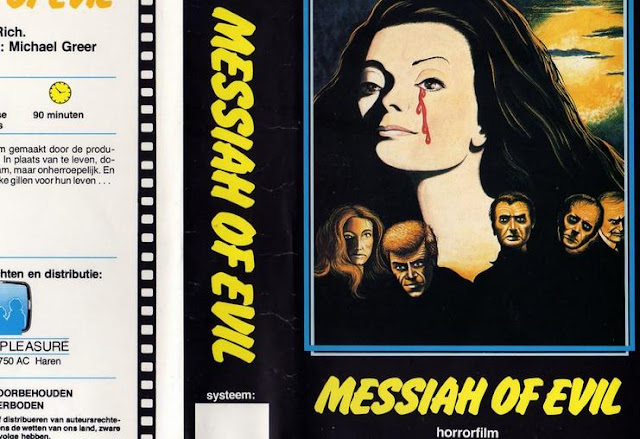 Not much for me to say about this except that the writer/director husband/wife team of Willard Huyck and Gloria Katz went on to write “American Graffiti”, “Best Defense”, “Temple of Doom” and “Howard the Duck”.  While Lovelock is already wondering whether or not this film will also have featured duck boobies, Starkwell is intrigued by the eclectic omelet of seemingly capable writing that the couple has done, and looks forward to this early egg.  All thanks to Mill Creek’s never ending supply of 50 in 1 movie packs!
[...]
[Opening scene is totally confusing, and with horrifying music.]
Starkwell: Do you think the music is meant to scare us?
Lovelock: What is that guy shooting at?
Starkwell: Why isn’t she scared?
Lovelock: Is that the screaming girl from the hallway?
[...]
I had to stop writing down the conversation at this point, because hey just kept asking questions to which there were no clear answers.
[...]
[Gas Station attendant dies.]
Starkwell: Wait, what happened?
Lovelock: It looks like the lights went out and he tripped and fell into some red paint.
[...]
After that brief interlude of implied carnage and bright red blood, they resumed asking questions incessantly.  Here are some that stuck out.
[...]
Starkwell: Who stuffs their dog?
[...]
Lovelock: Was that old lady slipping that guy some skin?
[...]
Starkwell: Does she always wear the same thing, or is this the same day?
Lovelock: Maybe she's a super hero?
Starkwell: What's her super power?
Lovelock: Makes any scene boring.
[...]
Lovelock: What exactly is she rubbing on them ol’ boobies?
[...]
The more the questions started piling up, the more the film started to creep them out… in a way.  There’s something eerie about anything that raises this many questions.  They then started to think, nay worry, that the awkward cuts and nonsensical plot development were actually part of some sort of deliberate game, meant to mess with their heads.  They continued to ask questions, but they began to take on a much more sinister and paranoid tone.
[...]
[Main Character lets Tom and the Naked Harem stay at her father’s insane arty boathouse thing.]
Starkwell: Why would she just let them stay there?
Lovelock: Why would she stay there?
Starkwell: 'Messiah of Evil', what are you doing to us?!?!??!
[...]
Then there was the most ridiculously awkward “seduction” scene, where Peeping Tom hugs the main character while she wears a flesh tone outfit.  Numerous times, both Starkwell and Lovelock made comments about how the music never makes any sense, and mostly just makes them feel uncomfortable and stressed.  Then Starkwell wondered if that was the point, and Lovelock’s mind was blown.
[...]
[Creepy Albino guy eats a rat.]
Starkwell: Seems like a logical choice.
Lovelock: Do you mean for the Albino character, or for the progression of the story?
Starkwell: Both.  Also, neither.
[...]
Then there was a grocery store scene that involved a mob of zombies, a girl being eaten, and, well, jazz fusion.  It ended abruptly and cut to, as usual with this fucking movie, a shot of the ocean.  The movie started to get weirder, and make even less sense, and I believe Lovelock said “I’m FREAKING OUT, MAN!!!!!!” and ran out of the room.  He ran back in when he heard Starkwell say “Nice hat!” out loud.  He ran back out again when the main character's monologues started up again.
[...]
[Girl goes to the movies, theatre slowly fills up with zombies.]
Starkwell: I kind of wish we were watching the Western that she is watching.
Lovelock: Aw, just fucking eat her already!
Starkwell: You’re back?
Lovelock: Hooray!  They ate her!
Starkwell: Wait, did they eat her, or did she just get ketchup on her hand?
Lovelock: The screaming face shots suggest death, but the background music screams interpretive dance.
[...]
Then the movie got even weirder, and more incoherent, and Starkwell and Lovelock both looked legitimately terrified.  I don’t know if they are scared of the film’s content, or just the film itself.  It’s a subtle distinction, but an important one.  When I asked them which it was, they just told me that I wouldn’t understand and to make it stop.  Then there was a cowboy flashback scene narrated by the girl’s zombie father, and Lovelock started crying.  Zombie Father then tried to eat his Daughter and Starkwell closed his eyes and covered his ears.  But, this was mostly because the soundtrack was about as irritating as sandpaper to the testicles.
[...]
Starkwell: What part did you hate the most?
Lovelock: When she threw up bugs and lizards… you?
Starkwell: Oh good one… I’d say Homeless Guy Monologue scene.
[...]
The movie ended and, believe it or not, it got even more nonsensical.  Both Starkwell and Lovelock just sat there, passionately hating this movie.  In a way, this movie is amazing, surreal, inventive and ahead of it’s time.  In another more accurate way, it’s a complete turd.  Flush.
Documented by Kev D. and Posted at 20:30