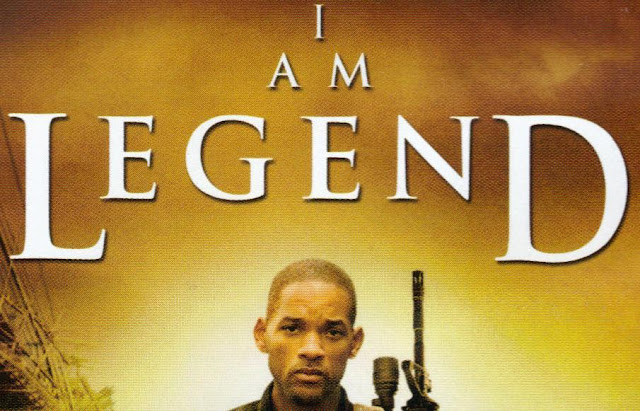 Unless you count the mockbuster “I Am Omega”, then 2007’s “I Am Legend” is the third and most recent adaptation of the Richard Matheson novel.  This one stars the Fresh Prince and was directed by the director of Britney Spears’ “Slave 4 U” and J. Lo’s “Waiting for Tonight”.  So OBVIOUSLY I’m expecting that Lovelock and Starkwell will like it as much as they did the Vincent Price version from the ‘60s.
[...]
[Three years after the cure for cancer is found, NYC is a deserted wasteland.]
Lovelock: Man, they cured cancer, AND got rid of traffic?
Starkwell: No, dude, I think that humanity was wiped out by some kind of plague.
Lovelock: Fair enough, but it still means no traffic.
[...]
[Neville waits for survivors, plays golf off of an aircraft carrier.]
Lovelock: Doesn’t seem like such a bad life.
Starkwell: He’s completely alone, all the time.
Lovelock: What about that cute girl in the video store?
Starkwell: The mannequin?
Lovelock: Maybe.
[...]
[Puppy runs into building, Neville has to go in after him, and sees monsters.]
Lovelock: That’s why they have leash laws.
Starkwell: Yeah, that’s why.
[...]
The infected seem to be SUPER RABID EXTREME TO THE MAX, also entirely computer animated, which kind of, well, sucks.  Starkwell and Lovelock talked at great lengths about the differences between this film’s infected and those of the earlier adaptations.  They also wouldn’t shut up about how cute the doggy is.  Seriously, did you see when they show him as a puppy??!!?! Come on! It’s totally insane.
[...]
[Doggy gets bit by zombie dogs.]
Lovelock: I thought I couldn’t possibly hate zombie dogs any more then I already did, but they just took our puppy away.
Starkwell: Man, fuck this fucking movie.
[...]
[Neville wakes up, “Shrek” is playing.]
Lovelock: I hate when they show real movies inside of a movie.  It feels wrong.
Starkwell: It’s like product placement.
Lovelock: Imagine if in one movie, they show a scene from another movie, and in that scene, there’s product placement in it.
Starkwell: I’d rather not.
[...]
[Neville gives a Bob Marley lesson to Survivor Girl.]
Lovelock: Do you think if they cast a white guy as Neville they would have used Bob Dylan instead of Bob Marley?
Starkwell: Should we be talking about this?
[...]
[Survivor’s camp in Vermont.]
Lovelock: Vermont is beautiful.
Starkwell: Yeah, zombie plague or not, look at the foliage!
[...]
Although I am sure that faithfulness to the book is thoroughly lacking, Starkwell and Lovelock both agreed that the film did what it set out to do.  I personally think that they would have liked it more if the dog hadn’t died.  Lovelock claims that he had recently been cutting an onion, but I know those were puppy death induced tears.
Documented by Kev D. and Posted at 17:00