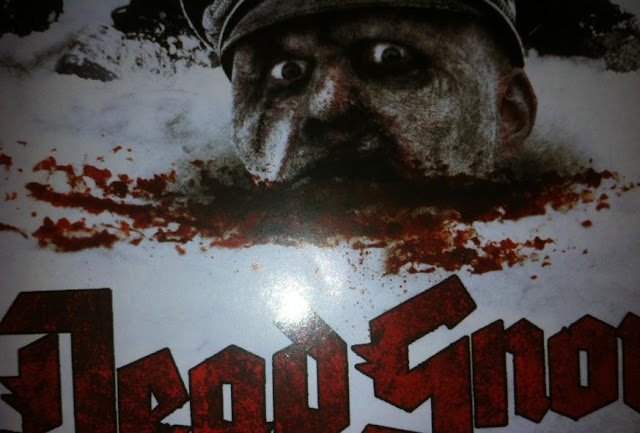 It’s not often that I get the chance to have a look at what Norwegian horror cinema is all about.  So, given the opportunity to show 2009’s “Dead Snow” to Lovelock and Starkwell, needless to say, I jumped at the aforementioned opportunity.  Along with “Outpost”, this is one of the fewer recent Nazi Zombie movies that I can think of, and promises to be a lot of fun, even if Lovelock is already complaining about the subtitles, before we’ve even hit play.

[Girl runs through snowy woods, away from some kind of monster.]

Starkwell: It’s been a while since I’ve seen a good Day for Night shot.

Lovelock: Shhhh… The Nazis are trying to have a meal.

There was a scene where the characters were talking about horror films, which sparked a debate between Starkwell and Lovelock about whether or not it is okay to directly reference films inside a film.  I honestly don’t know who won, or who was on which side, but at one point someone said that “the minute you reference something, you open yourself up to comparison and that can barely ever be good for you.”

[Blondie sees something in the woods, creepy old guy tells them Nazi story.]

Starkwell: This film manages to mix together so many terrifying things.  Night time, the woods, snow and cold, Nazis, zombies and all set in a cabin in the middle of nowhere.  Even the language sounds creepy.

Lovelock: Seriously, it sounds like a backwards record.  That’s how monsters sound in my nightmares.

[Guys race down hill on a GT Snow Racer.]

Lovelock: I hated the GT Snow Racer kids.  Where’s the challenge when you can steer like that?

Starkwell: Tobogganing is supposed to be a challenge?

[Guy follows footprints and falls into a pit.]

Lovelock: That’s why when I see bloody footprints leading away from a dead body, I don’t follow them.

[Girl follows Fat Dude into the outhouse and screws him.]

Starkwell: He just finished wiping his ass and she hops on for a ride?

[After the hump, she falls into the shit hole.  Lovelock pukes.]

Then the horror action picked up at top speed.  I think at one point after Fat Dude’s head was ripped in half, Lovelock said “That’s what I’m talking about!” Once the Nazi Zombies started making their fully lit daytime appearances, and the characters began squaring off with them, there was little for Starkwell and Lovelock to do except sit and marvel at the impressively horrifying Nazi zombies, the massive amounts of gore, and the remarkably effective use of color.

Starkwell: Something else scary to add to the list… buried alive.

Lovelock: Maybe this is the Norwegian version of “Takin’ Care of Business”.

Do they reference famous films? Yes.  Is it worthy to make those references? Absolutely it is.  I feel like people will reference this movie in twenty years.  Lovelock and Starkwell have both agreed that the Nazi Zombie genre is alive and well, at least for the length of this glorious film.  Also, when the ending credits started, I think that Lovelock’s head full exploded.
Documented by Kev D. and Posted at 20:20