Children of the Living Dead. 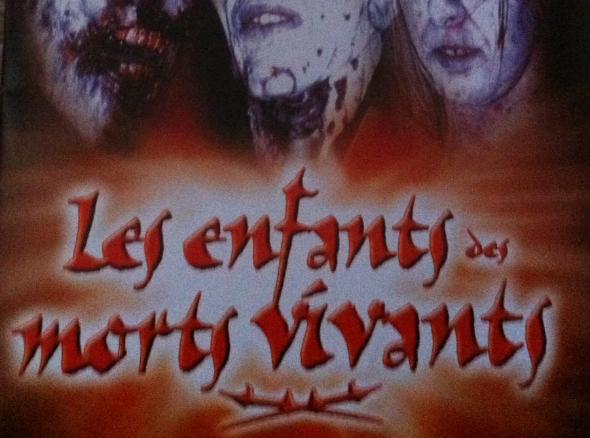 It “stars” Tom Savini and is directed by a guy named Tor Ramsey.  There is a definite connection to the original “Night”, given that John Russo produced it, and I think it even stars children of some of the people involved with the Romero works.  So how bad can 2001’s straight-to-video “Children of the Living Dead” really be?  I’ll tell who is about to find out.  Lovelock and Starkwell.  Wait until they hear that Savini is only in the first five minutes.  I read an interview with Savini wherein he called this movie a “piece of shit”.  It’s with that glowing stamp of approval in mind that I proudly present this DVD, bought at a DVD outlet store for two dollars, to Lovelock and Starkwell.
I should probably mention that the DVD is from Quebec, and somehow lacks the English audio track.  So, we will be viewing this one dubbed into French.  Honestly, it probably helps the film, just by adding a level of unintentional hilarity that these film makers are likely incapable of.
[...]
[Helicopter gunman mows down a bunch of Zombies.  Savini takes down a bunch.  Then he explores a farmhouse and explains that zombies don’t attack children.]
Lovelock: ACTION PACKED THRILL RIiiiiIIIIiiiiIDE!!!
Starkwell: Why wouldn’t they attack children?  This is dumb.
Lovelock: If it maintains this level of action, I may be willing to forgive it.
[Savini flips out and then dies in the slowest moving zombie attack ever committed to DIRECT-TO-VIDEO.]
Lovelock: I think the bad dubbing helps cover up the bad acting.
Starkwell: I think I’m going to have a lot of trouble making it to the end of this one.
[...]
[Lame “college aged” kids drive drunk… 14 years later.]
Starkwell: Funny… it feels like fourteen years have gone by since the movie started.
[The lamest looking zombie EVER jumps / dances / sachets out into the road.  The bus flies off a cliff.]
Lovelock: Best scene ever.
Starkwell: Honestly, if they rolled credits now, they could totally save this movie.
[...]
[At the funeral for the “kids”.]
Lovelock: See, that’s why having a name like ‘Candi’ is weird to me, because at the funeral, they say “we will miss you… Candi…” and it just doesn’t sound sincere.  It sounds more like a stripper's going away party.
Starkwell: "We will miss you, Candi... good luck at community college next year."
Lovelock: Exactly.
[...]
Sometime after that, the Lame Super Zombie goes around biting into ALREADY DEAD PEOPLE and making them rise up out of their coffins.  Starkwell is putting his shoes on, very ready to leave TOP SPEED.  At least if that happened, something would be moving fast.  Eventually after another twenty minutes Lovelock was fast asleep and Starkwell was long gone.
[...]
[Nothing happens… dubbed in French.]
Lovelock: ZzZZZzzzzzzz….
[...]
The movie eventually ended and restarted without waking Lovelock up.
[...]
[Lovelock wakes up, ten minutes into the film, the second time it started playing.]
Lovelock: Woah, I must have been asleep.  I had a nightmare about the worst movie that I have EVER SEEN and…
[Lovelock notices the movie playing.]
Lovelock: What the...?? NOOOOOoooOO!!!!  IT’S A MAD HOUSE!!!
[Lovelock runs away crying.]
[...]
Let’s just say Tom Savini was being kind in that interview.  The French dubbing helped elevate it to a somewhat surreal level, but a surreal and shit level, nonetheless.
Documented by Kev D. and Posted at 11:00