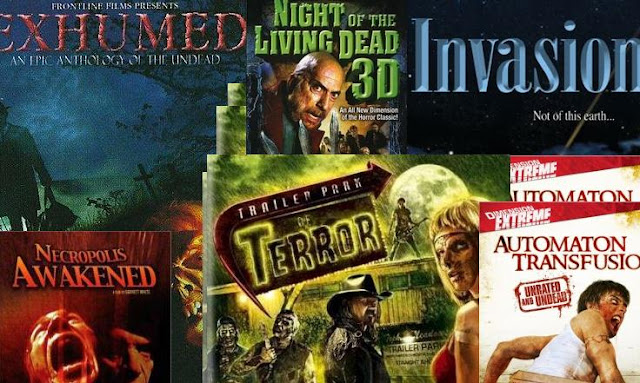 This second round of Unwatchables is coming at you thanks some very poor DVD buying decisions that I have made.  I am noticing a pattern too.  The only movies that seem to make it to the dreaded unwatchable status were made after the turn of the millennium.  Often people will talk about movies and how we don’t make them like we used to.  Apparently, we even don’t make trashy micro-budget ones like we used.  Starkwell and Lovelock didn’t make it through any of these films from start to finish, but here was a little of what they had to say about each before they set the DVD player on fire.  Seriously, I went through six DVD players.

Starkwell: The box said “Pulp Fiction” meets “Day of the Dead”.  I’m not really getting that.

Starkwell: Why would anyone make their voice do that?

Lovelock: Probably so he could play more than one character.

Starkwell: This kind of feels like a white person version of what he thinks a samurai movie would be…. Oh wait.

Lovelock: Holy shit! That is the most annoying voice I have ever heard.  Where did they find her?

Starkwell: The first person view from the squad car is interesting.  Nice concept.

Starkwell: Wait are they just driving in circles in a field and filming it?

[Lovelock was asleep the whole time.]

Starkwell: Do you think they made this movie just to see that girl’s boobies?

Lovelock: It would explain why the rest of the movie seems like they were making it up as they went along.

Starkwell: I think I would respect this movie more if it were made twenty years ago.

Starkwell: Do you think they decided to have the soft-core barnyard sex scene before or after they made it 3D?

Lovelock: I don’t know, but I don’t think my glasses are working very well.  But I do see well enough to know that Sid Haig really needs money.

Starkwell: Yeah, he must have been fresh off of shooting “House of the Dead 2”.

Lovelock: I sort of wish my glasses was a blindfold.

Starkwell: And that it had earplugs attached.

On the bright side, at least we have six new coasters for the coffee table.  Some of these had some good ideas, but all eventually spiralled dreadfully out of control and ended up in .  I think Sid Haig might be the mayor there.  I’m going to go bake some brownies, and hopefully Lovelock and Starkwell will begin talking to me again.
Documented by Kev D. and Posted at 08:00