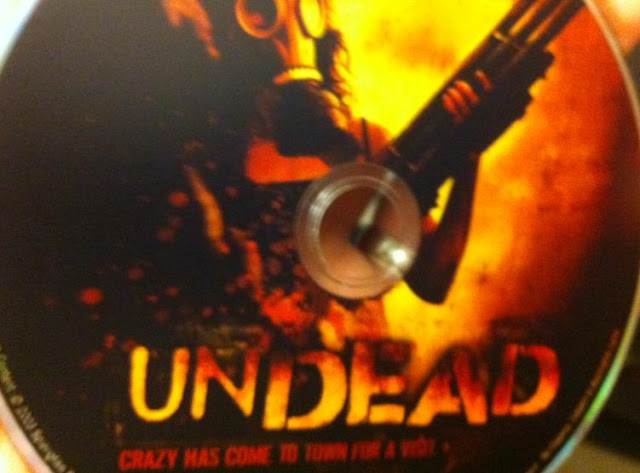 Australian twin brothers Michael and Peter Spierig recently wrote and directed a pretty sweet vampire movie (an accomplishment in this modern age of sparkly vampires) called “Daybreakers”, and are currently working on a remake of the “Dark Crystal”.  But before all of that, they made a zombie movie, 2003’s "Undead".  To follow an Australian zombie film with a big budget Hollywood vampire movie starring Ethan Hawke and Willem Dafoe, means that they must have done at least a few things right.   And so, without any further ado, IT’S GO TIME!!!!1111

Starkwell: They are certainly establishing a lot of different characters.

Lovelock: Great casting on the sleazy agent guy.  I already hate him.

They’ve very quickly established characters, and waste no time to get to the action.  Starkwell is amazed by how much he already cares about the female lead Rene, and that it “says a lot about the directing and the quality of the writing”.  Lovelock won’t shut up about how good the musical score is.  After we see the first zombie and the color of the film goes from bright and sunny to dark and gloomy, both Lovelock and Starkwell sat quietly, heavily immersed and already deeply invested in the story.

Lovelock: I told you that zombie children could be cool!

Starkwell: Normally I hate when directors try and John Woo-ify their characters, but somehow this time it worked.

Lovelock: Zombie kid worked, guy in overalls holding guns sideways worked… What’s going on here?  I feel like we are in the "Twilight Zone".

Starkwell: How could anyone take cops seriously if they wear hats like that?  She looks like she is going on a picnic.

Lovelock: This ain’t no picnic.

[Overalls Man does a back flip, hooks his spurs into the wall above the door, hangs upside down, and shoots zombies in all directions.]

Starkwell: Okay, that one was a bit much.

Lovelock: Yeah, even in Australia, that was wicked lame.

As the movie sashayed forward stylishly, Lovelock and Starkwell sat quietly, only occasionally imitating the Australian accent, poorly.  Starkwell was a little disappointed that Overalls actually referred to the zombies as zombies.  Call him a purist, but as he said “The first rule of ‘Fight Club’ is don’t talk about ‘Fight Club’”, or something to that effect.

[They kill an Alien.]

Starkwell: They can put up enormous fences around a town and make it rain, but one bullet kills them?

Lovelock: Just because we’ve invented the iPhone and Pac-Man video games doesn’t mean a spear through the gut won’t fuck us up.

Lovelock: I knew it!

Starkwell: No, no you didn’t.

[On the extraterrestrial virus being spread around by the meteor fragments that fell.]

Lovelock: That’s why I never touch things that fall from the sky.

When you see a film like this, as Lovelock says, it “makes you realize just how bad some zombie movies actually are.”  Story, characters, action and dialogue were all well above par.  Starkwell talked about how it makes sense that Hollywood would take notice of the Brothers Spierig after this.  Sure, some of it is a little too silly, and some of the CGI effects aren’t exactly awe inspiring, but Lovelock and Starkwell give it one million thumbs up, and highly recommend it for fans of maximum awesomeness.
Documented by Kev D. and Posted at 18:15