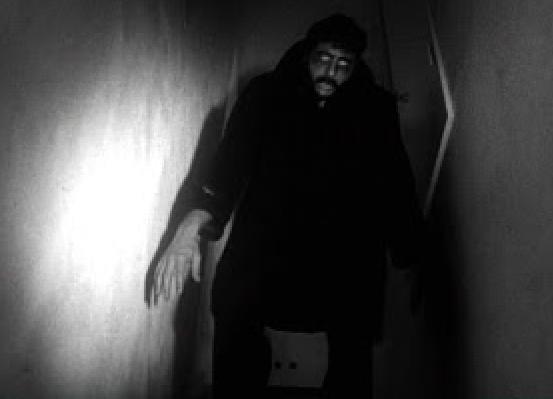 In the late 1950s, a man, a writer and director named Jerry Warren, set out to make his own statement about communism and whatnot, in his 1959 motion picture “Teenage Zombies.”  Well, I read off the internet that it’s about communism.  Lovelock hopes it’s about zombies.  Starkwell hopes it isn’t too long.  This film is packaged with three others on this disc.  This means that it probably isn’t very long, or very good.  As I hit play, both Starkwell and Lovelock are astonished at how bad the print looks.
[...]
[Out for a routine waterskiing session, teenagers find an island.]
Lovelock: The music certainly makes me think something crazy is about to happen.
Starkwell: Wait, they were out waterskiing in those outfits?
[...]
[Teenagers see hobbling people.]
Starkwell: How could their first guess be that they are walking dead?
Lovelock: He said doped or dead… I mean, his first suspicion was still wacky tabacky.
[...]
Considering the film’s short runtime, Starkwell was surprised how much screen time is eaten up with footage of them walking on the beach looking for their boat.  But the long trek did end with a pretty sweet looking zombie.
[...]
[They hear girls screaming.]
Starkwell: The zombie kind of looks like Super Mario.
Lovelock: It’s just Mario.  Super is more like a general way to describe him.  You know like, “man, that’s one super Mario.”
Starkwell: If you say so.
[...]
[Soda shop owner takes Dufus and Dotty to look for Water Ski Gang.]
Starkwell: Why would the soda shop guy take such an interest in their lives?
Lovelock: It was a different time, back then.
Starkwell: So the cops couldn’t find the island, but Dufus and Dotty steal Walt’s boat and find it immediately?
Lovelock: They didn’t steal it.  They just borrowed it, I’m sure Walt won’t mind.  Anyways, you need to be a teenager to think like a teenager…  After all, like Dufus said, “They just went water skiing, no special direction!”
Starkwell: This movie has no special direction.
[...]
The two seemed bored.  Nothing was happening.  They had a little excitement when the MILL CREEK ENTERTAINMENT logo randomly appeared in the bottom right corner for a couple of minutes.  But, I’m pretty sure that wasn’t part of the original film.
[...]
Lovelock: J.J. Abrams totally ripped this off when he created “Lost”.
Starkwell: Are you for real?
[...]
[Mad Scientist in evening gown gasses a guy in a gorilla suit.]
Starkwell: …
Lovelock: …
[...]
Starkwell: What kind of army colonel has curtains like that in his office?
Lovelock: Ones that are filmed in the director’s house.
[...]
[Guys break out then try to get the girls’ cell open.]
Starkwell: The main character was wearing a t-shirt before, now he is in a long-sleeve…
Lovelock: He has his sleeves rolled up.  Close enough.
[The guys leave the girls behind.]
Starkwell: Wow.  It really was a different time.
Lovelock: Whatever.  Those dames were just going to hold them back.  You can’t trust a skirt to make a clean getaway.
Starkwell: Hey, it’s a t-shirt again!
[...]
The main guys make a plan to build a raft, while skipping stones at the beach.  I think they really hate the girls, as they pretty much tell them to shut up and get some sleep.  Starkwell and Lovleock had mostly run out of things to say.  Unless you count “are we there yet?”
[...]
[The detective is in on it.]
Lovelock: Well, that explains everything.
Starkwell: No, no it doesn’t.  I think that just makes it more confusing.
[...]
Well, after teenagers turning into zombies and then back to normal again, they get away thanks to a zombie gorilla.  The teenagers saved America, apparently, and everything is back to normal.  Except the guy’s t-shirt which is long sleeve again.  Dufus suggests that they go horse back riding, and for some reason they all chase him out of the police station kicking him in the ass.  Then, the movie ends.  The real tragedy in all of this is that Starkwell and Lovelock can’t get their seventy-five minutes back.
Documented by Kev D. and Posted at 08:00