Oasis of the Zombies. 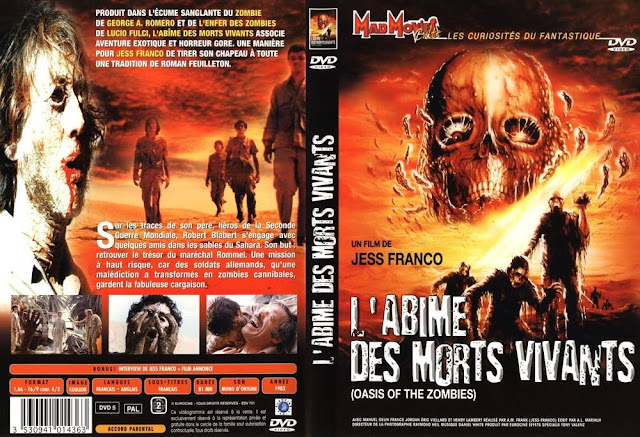 After their experience with Rollin’s (or was it J.A. Laser???) “Zombie Lake”, the thought of another Aquatic Based Nazi Zombie film has Starkwell and Lovelock a little terrified.  Not to mention the fact that this one is from seasoned pornographer and cinetrash maker extraordinaire Jess Franco.  What is about to ooze into their eyes and ears is his notoriously abysmal “Oasis of the Zombies”.  I don’t think they’re truly ready.  Can you ever be truly ready for Franco?  The quality of the print is atrocious.  That can’t possibly be helping this.  Also, no matter what the original language was, this is being shown to us in PISS POOR ENGLISH.

[Girls in hot pants get eaten.  Opening credits play with some kind of flute music.]

Starkwell: Why would two girls in short shorts and tank tops be driving around the deert in Africa?

Lovelock: To his credit, the girls kept their tiny clothes on.

After this, not much was going on.  There appears to be some sort of Nazi gold thing happening, and there are some pretty sweet moustaches.  The story is surprisingly cohesive, although not very fast moving.  I think something is being lost in translation, since, as Starkwell said, “did he tell her to hold on to her camel?” and Lovelock’s question “so the girls at the beginning were lesbians, right?”.

[Flashback to when the Nazis were ambushed at the Oasis.]

Starkwell: That’s a lot of grenade being tossed around.

Starkwell: That’s a bit of a stretch.

Lovelock: Wait.  Are we still in the flashback now?  I’m confused.

Starkwell: Little do they know that the guy who killed the one student’s father is also out on a journey for the very same gold that they are going after.

Lovelock:  I’m not even sure that I knew that.  But thanks for clarifying.

Starkwell: He sure likes to focus on that swastika.

Lovelock: It’s so that we know that the zombies are Nazis.

Starkwell: Yeah, otherwise they just look like dudes with oatmeal on their faces.

Lovelock and Starkwell sat quietly, watching the surprisingly freaky looking zombies eat people.  Starkwell noted “of course, they took her pants off first” to which Lovelock replied “how else would they be able to eat her?”  At one point, they simultaneously exclaimed “LONGEST DEATH EVER!”

Starkwell: How would they know where to dig?

Starkwell: Considering half of them have already been attacked by zombies and are still sticking around, I’d say that their instinct is piss poor.

Starkwell: Is it just me or do the zombies make noises like the raptors in “Jurassic Park”?

Lovelock: Wow.  Normally I would bring in the oddly placed references.  I’m proud of you.  Anyways, you’re wrong.  They sound like a jug band member playing a washboard.

After the fifth shot of a hand coming out of the sand, they were starting to lose their patience a little.  But then finally the carnage started and they ate tons of popcorn and cheered.

Lovelock: Did that guy say "let’s make Molotov Cocktails like in school?”  Where the Hell do they go to school?

Starkwell: Am I the only one that thinks that Franco focuses on the zombie faces for absurdly long amounts of time forever?

Lovelock: How come that one zombie disappeared into thin air?

Starkwell: Let’s not ask questions that we know don’t have answers to.

Lovelock: You do that all of the time.

Judging by the final lines of dialogue in the film, the main character was just there to “find himself”.  Fucking college kids…  Always trying to explore themselves by traveling.  Anyways, maybe it was just because “Zombie Lake” drove their expectations for Nazi zombie films down to an undetectably low level, but they seemed to feel that this was a perfectly adequate and fun romp in the desert, full of burning Nazis and ‘splosions.
Documented by Kev D. and Posted at 17:15