Land of the Dead. 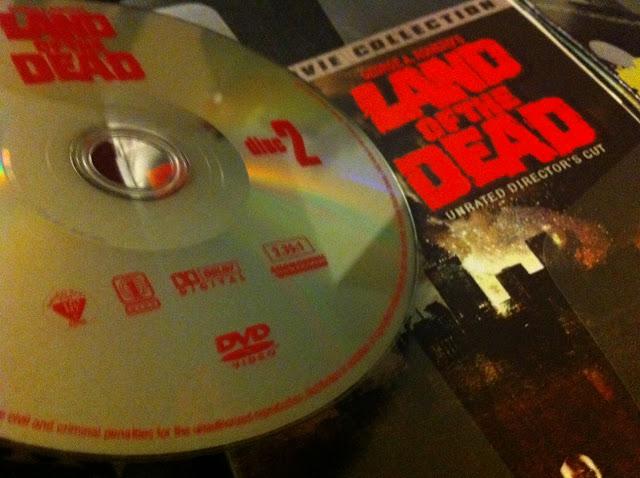 Considering he invented this shit, you would think people would have a little more respect for his more recent work.  Is it all as bad as people say?  Has he become a mockery of himself?  Let us, myself, along with Starkwell and Lovelock, find out.  This copy of George A. Romero’s 2005 return to the genre “Land of the Dead” came as a two disc set along with the Zack Snyder “Dawn of the Dead” remake.  It’s an extended uncut version not seen in theaters.  But we didn’t see it in the theaters anyways.
[...]
[Anytown U.S.A., the zombies are everywhere.]
Starkwell: Zombies playing tuba and trombone?
Lovelock: More like the Band of the Dead…
Starkwell: While it is refreshing to see slow walkers… communicating and thinking zombies?  I don’t know.
Lovelock: If Romero says they can, then they can.
Starkwell: Zombies like fireworks?
Lovelock: If Romero says they do, then they do.
Starkwell: Zombies have feelings?
Lovelock: If Romero says… aw fuck, I don’t know… I’m a little scared now.
Starkwell: Zombie using guns?
Lovelock: We may be witnessing another “Phantom Menace” here…
[...]
As worried as they were, the movie showed great promise, it had solid acting, and the type of proper zombie action that we all know and love.  It also had good characters, which is usually one major player that separates good zombie movies from terribly shitty ones.  The one bad part about the characters is that, as Starkwell noted, they all have “the dumbest fucking names I’ve ever heard.”
[...]
[Futuristic slums and anarchy.]
Lovelock: I think that in the future, the important slum lords wear hats.
Starkwell: It does sort of seem like that happens a lot.
Lovelock: Also, the women wear fishnet stockings and DON’T look inbred AT ALL.
[...]
[Puppet show.]
Starkwell: Did they just say zombie? They’re not supposed to say zombie.
Lovelock: Weak.
[...]
[Cholo asks for money…]
Starkwell: How is it possible that there is still money?  Why would it still be useful?
Lovelock: Maybe when he says ‘Five million dollars’ he really means ‘LOTS OF SANDWICHES.’
[...]
At one point they introduce three new characters for no reason.  Each is more ridiculous than the one before.  One actually says “call me Motown.”  I wish I was joking about that.  Lovelock said “I’ll just call you lame, and hopefully a few scenes from now, dead.”
[...]
[Kaufman gives a speech to his board of directors.]
Starkwell: Dennis Hopper kind of phoned this one in.
Lovelock: Why is there always a character that has a pet rat?
Starkwell: Also, he rides a skateboard.
[...]
[Zombies emerge from the water.]
Starkwell: Why would they be taking a breath?
Lovelock: Most likely for the same reason that it was necessary to show two women making out.
[...]
[Fat Hawaiian punches girl out.]
Starkwell: How about a nice Hawaiian punch?!?
Lovelock: Call me Motown.
[...]
[Motown gets eaten.]
Starkwell: Call me Motown.
[...]
Starkwell and Lovelock went quiet for a while, as the action picked up and the gore levels went off the charts.  They both yelled out “TOM SAVINI” at one point.  For no real reason, they repeated “Call me Motown” a few times as well.
[...]
[Zombies kill restaurant goers.]
Lovelock: That’s why I never sit on the terrace.
Starkwell: Yeah, that’s why.
Lovelock: Well also, sometimes there are people smoking out there.
[...]
[Main African American zombie looks all intense and shit.]
Lovelock: Romero may as well have given him the ability to say stuff like “Damn” and “Bitch, please” and “Aw hell no!”
Starkwell: It would certainly be less annoying than that moan of his.
[...]
Look, the movie has its problems, but Starkwell and Lovelock both approve of the film.  It has some great ideas, and although not all were executed perfectly, the movie is an overall success, even if the zombies learn how to feel and make car bombs and shit.
Documented by Kev D. and Posted at 09:10