King of the Zombies. 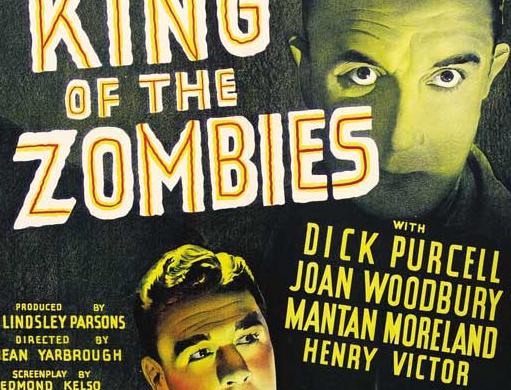 It seems that a lot of older zombie films involve people ending up on a weird island full of spooky ghouls and zombies and crazy people.  Apparently 1941’s “King of the Zombies” is no different.  Lovelock wants to meet the actual King of the Zombies and thank him for the awesome movies based on his peoples.  Starkwell tried to tell him that there was no actual King of the Zombies, but Lovelock interrupted him mid sentence with a well placed armpit fart.  This is another one of those Million-Movies-on-One-Disc type of deals, so I’ve already warned them that the quality of the picture will be less than ideal.

Lovelock: Am I the only one who feels like we’re about to watch a “Looney Tunes” cartoon?

Lovelock: I miss playing with toys.

Starkwell: It's only a model.

Lovelock: I can’t tell if I find Mantan Moreland’s performance offensive or hilarious.

Lovelock: Maybe it’s best if we don’t think about it too much.

Starkwell: Or talk about it.

Starkwell: Should we be talking about this?

[They find a mansion on the otherwise uninhabited island.]

Lovelock: I can see where “Lost” got all of its ideas.

Starkwell: Dude, you’ve used that one before.

[The Black servants are zombies.  Jackson sees them.  The White lame people don’t believe him.]

Lovelock: Do you think they knew what they were implying when they filmed it?

Starkwell: I sincerely hope so.

[Tuxedo Pants introduces the guys to some kind of rich white girl zombie.]

Starkwell: Wait, that’s his wife?  They’re commenting on both racial AND gender inequality in the 1940s?  Insane!

Lovelock: Rich white men are sucking the life out of women and ethnic groups and controlling them like mindless meat puppets to do their dirty work.

Starkwell: I’m proud of you.

Lovelock: Not to mention, it’s becoming quite clear that the two wooden white guys, parading around in Hugh Hefner gowns, are just there for show, and Jackson is the real hero of the picture.

Starkwell: I’m really impressed… you’re really getting into this!

Lovelock: Actually, I’m bored as shit.  When are the Black servants going to start eating people?

Starkwell: It was nice while it lasted.

The movie crawled forward like molasses on an uneven kitchen floor, but still managed to hold Starkwell’s interest.  Lovelock, on the other hand, said “snoozers” out loud at one point, after which Starkwell punched him in the nuts.  Eventually there were some awkwardly offensive “Voodoo” things happening on screen, and then, an eventual zombie uprising.  The dialogue confused everyone and really just left a lot of unanswered questions.  One thing is for sure, Mantan Moreland steals the show here.  After the insanely abrupt ending, the credits rolled, and Starkwell got up slowly, nodded his head and said “Powerful stuff.”  Then Lovelock got up slowly, nodded his head, and said “Also, dull as balls.”  Different strokes for different folks.