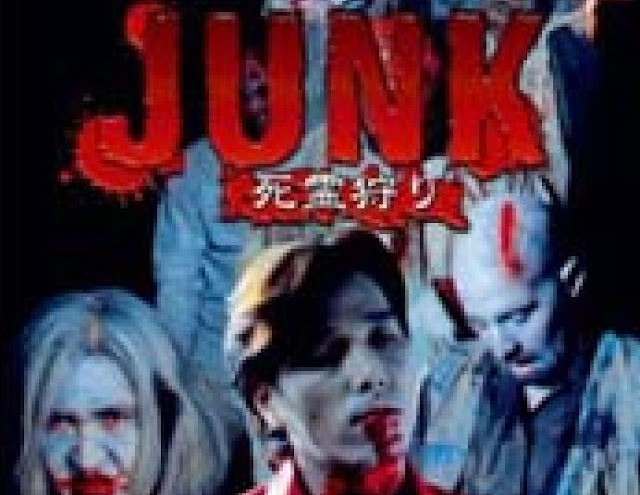 Since “Stacy” is the only Japanese zombie extravaganza that I have exposed Lovelock and Starkwell to, I felt I owed the country of Japan an explanation.  Hopefully the turn of the century’s more traditional zombie fare, “Junk” will give Starkwell and Lovelock a better view of the Japanese zombie film.  If this one doesn’t work there’s always “Wild Zero”.  Lovelock’s mad that he will have to read again.

Lovelock: Why is everyone wearing sunglasses?

Starkwell: Because “The Matrix” had just come out.

Lovelock: That explains the soundtrack.

Starkwell: For a movie that has the evil American military scientists creating zombies, they borrow an awful lot from American films.

Lovelock: Maybe the zombies are a good thing in this one…

Starkwell: Are we supposed to be rooting for these thieves?  Because they just shot a lady.

Lovelock: She was asking for it.

The movie kicked forward, developing characters, pushing the EVIL AMERICAN MILITARY agenda a little more, and leading up to the exchange between the jewel thieves and local Yakuza.  Obviously they plan on meeting in the secret warehouse where the EVIL AMERICAN MILITARY have been conducting their zombie experiments.  As much as most of the characters are incredibly hateable, the one female lead seems to be a decent person.  Before they had time to discuss this any further, a zombie ran a steel rod through a guy’s neck, and both Starkwell and Lovelock applauded.  The movie was very quick to show us that it would not be light in gore and headshots.

Starkwell: He asked to see the money first, they show him a briefcase, and he says “OK.”?

Starkwell: “Well, he has a briefcase, so it must be full of money.”  I’m glad he’s dead.

As the bullets flew, and more and more dead people came back to life, Starkwell and Lovelock stayed pretty quiet, thoroughly entertained.  A lot of comments were made about the American Military Mustache Man and the fact that only the main characters’ guns seem to ever run out of bullets.  Apparently the Yakuza have INFINTY BULLETS guns.

Starkwell: How would she know how to stop the self destruct sequence?

Lovelock: For the same reason that the Americans have military bases all over Japan.

[Japanese Scientist mows down some zombies with a machine gun.]

Starkwell: Where would he have learned to shoot like that?

Starkwell: After all of this time, why would naked zombie suddenly decide to put on a leather outfit, in slow motion?

Lovelock: You already answered your own question earlier.  It is because the director had just watched “The Matrix”.

Starkwell: Where the Hell is all of that wind coming from?

Lovelock: Long answer, the same place all of that fog is coming from.

Lovelock: Well, either that or John Woo.

[Super Zombie comes back, even after a bullet in the head.  With blond hair.]

Starkwell: Why would her hair turn blond?

Lovelock: So that the male stunt double could wear a blond wig.

As the credits rolled Starkwell and Lovelock agreed that while the film featured a hefty amount of action, and a good amount of old fashioned gore, overall it lacked character.  In fact, what it lacked most were characters that we would actually give a shit about.  I mean, the film ends with them stealing a car.  Well that and that Super Zombie is still alive.  Fun movie, but really fucking stupid.  Also, why is it called "Junk"?
Documented by Kev D. and Posted at 07:00