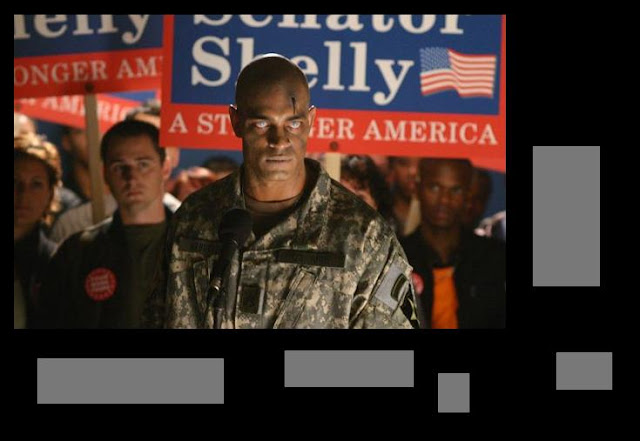 “Masters of Horror” was a relatively short lived television series that produced a mixed bag of shorter horror features helmed by titans of the genre.  In the first season, Joe Dante provided the show with the politically charged anti-war zombie effort entitled “Homecoming”.

[Ann Coulter type of woman talks on TV show, after having shown that later, she will be killed.]

Starkwell: So Dante isn’t exactly going to be subtle about this.

Lovelock: At least we know that the fictional Ann Coulter is going to get capped in the head.

Somewhere amidst George W. Bush impersonations on the television, dead soldiers rising from their coffins, and witty dialogue aplenty, I’m pretty sure I heard both Starkwell and Lovelock let out cries of joy.

Lovelock: Is the point to make me wish that they would kill more of these assholes?

Starkwell: That is most definitely not the point.

[Undead soldiers simply want to vote, presumably against the president.]

Lovelock: I am suddenly totally cool with the whole not killing people thing.

Starkwell: The Super Christian Church guy’s flip-flop about the undead soldiers was a nice touch.

Starkwell: Wow, he even found a way to comment on gun control too.

Lovelock: I hope he makes fun of Creationism next.

As the film wrapped itself up, both Starkwell and Lovelock stood up in applause.  In its short run time, this film accomplished more than most do in twice the time.  Bravo, Joe Dante, and thank you.
Documented by Kev D. and Posted at 03:00