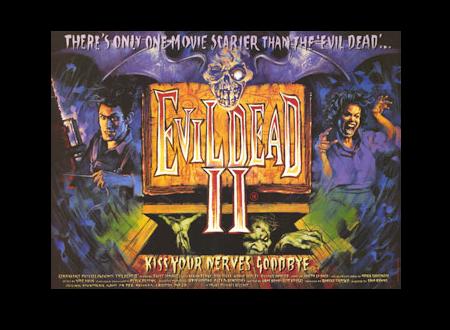 Before doing shitty super hero sequels (Spiderman!) and forgettable horror movies with no real story (Drag Me to Hell!), Sam Raimi was changing the face of horror comedy forever with his “Evil Dead” series.  As anticipation fills the room, I press play for the Widescreen Version.
[...]
[Introduction about Necronomicon.]
Starkwell: I feel like I’m watching one of those old National Film Board of Canada documentaries.
Lovelock: What like that lumberjack cartoon?
Starkwell: I think they were loggers... but no, not exactly.
[...]
[Ash play tape recorder, evil spirit take Linda.]
Lovelock: That’s why I never break into abandoned cabins, leaf through creepy books, and press play on old fashioned tape recorders.
Starkwell: Yeah, all of that.  That’s why.
Lovelock: Those are some pretty solid reasons.
Starkwell: You know, he didn’t give Linda much time to explain herself before lobbing her head off with a shovel.
Lovelock: Trouble in paradise.
[...]
The movie is so fast paced, the effects are so good, and Bruce Campbell kicks so much ass, that it was hard to keep up with what Starkwell and Lovelock were saying.  Most of it just sounded like two school girls giggling, as if they had just found out that the boy they liked liked them too, while the movie races forward at the pace of a “Looney Tunes” cartoon and never seems to let up.
[...]
[Headless Linda the zombie dances ballet.]
Starkwell: Stop motion animation, when done well, will always look scarier and creepier than even the best CGI.
Lovelock: Old school effects for the win.
Starkwell: It also helps that sells every single scene as hard as he does.
[...]
[Enter redneck characters.]
Starkwell: We may have just found the movie’s first flaw.
Lovelock: Yeah, I hate redneck characters too.
[Ash fights himself with his own hand.]
Starkwell: Oh, "Evil Dead 2", I can’t stay mad at you.
Lovelock: I think I want to make "Evil Dead 2" wallpaper for my house.
Starkwell: I want to make sheets, so that "Evil Dead 2" can keep me warm at night.  Forever.
[...]
[Cabin comes to life.  Ash laughs-to-scream.]
Starkwell: I know I always champion Vincent Price’s laugh-to-cry in “Last Man on Earth”, but that was pretty sensational.
[...]
Starkwell and Lovelock were speechless for a while, due to gruesome and unforgiving horror perfection.
[...]
[Redneck dies in cellar.]
Starkwell: So much blood, and yet, none got on her.
Lovelock: At this point, can you please just suspend your disbelief a little.
[...]
[Montage of Ash arming himself.]
Starkwell: Ladies and gentlemen, a legend is born.
[...]
Then Ash said “GROOVY” and they both stood up and cheered.  When he said “Swallow this”, I swear I think I saw a single tear going down Lovelock’s face.
[...]
[Final gory fight sequence.]
Starkwell: …
Lovelock: … [nervous fart]
[...]
Nearly twenty-five years old, and it still looks as good, scares as much and provides as much fun as the day it was first released.  I would tell you Starkwell and Lovelock’s reaction to the ending, but they’ve already run out into the streets going door to door to spread the good word.
Documented by Kev D. and Posted at 23:30