The Dead Next Door. 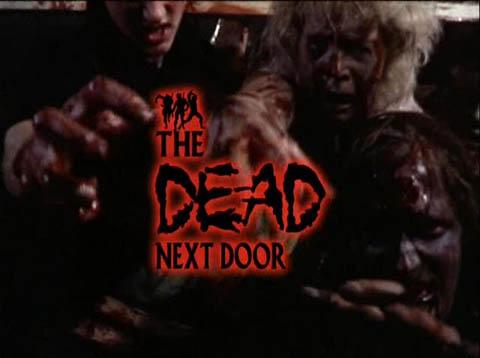 Apparently this movie took years to complete.  That’s what happens when you have no budget and try to tackle a story as grand as the one put forward in JR Bookwalter’s “Dead Next Door”.  Shot in Ohio through the majority of the ‘80s, this one saw its completion and release in ’89, and may or may not have lived up to everyone’s hopes.  Let’s at least find out what Starkwell and Lovelock think of it.  Apparently Bookwalter followed this with a movie called “Robot Ninja” where a scientist helps a comic-book artist to become the superhero he has created in order to battle a vicious gang of rapists.  So yeah.
[...]
[Zombie tried to rent "Dawn of the Dead"]
Lovelock: Sweet VHS boxes.
Starkwell: I think this is going to be one nutty ride.
[...]
[Zombie apocalypse montage.]
Starkwell: Why would they bother showing a zombie using the telephone for that long?
Lovelock: The same reason that they mostly cast people with mullets.
[...]
We get introduced to some Zombie Squad members, some pretty sweet gore and some of the worst acting in the history of people.  But, as Lovelock noted, “somehow it works.”
[...]
[Binocular shot.]
Starkwell: If you’re going to use construction paper to create that effect, you could at least make smooth cuts.
Lovelock: You ever try to cut perfect circles with scissors?  It’s impossible.
[...]
Lovelock: I think I’ve seen this movie before.  It was called “Ghostbusters.”
Starkwell: Are you basing that entirely on the Squad Car?
Lovelock: Maybe.
[...]
The overdubbing is funny.  Starkwell mentioned that it gives it that “campy Bruno Mattei feel.”  In order to save the world, they have to find some guy’s research lab in Akron, Ohio, the scientific center of the world, apparently.
[...]
[Reverend Sunglasses and his Church of Bad Haircuts keep zombies in a pen, and feed them humans.]
Lovelock: There’s something weird about this Reverend…
Starkwell: He runs a cult, sacrifices people, and feeds them to the zombies.
Lovelock: That’s not it.
Starkwell: It’s not?
Lovelock: No, I know!  It’s his fashion sense.  Who wears a khaki shirt and khaki pants?  What is he, a zookeeper?  And why is he always wearing those old lady Terminator sunglasses?
[...]
Not much was happening after this.  Starkwell and Lovelock made a half dozen comments about Commander Mullet and his braid.  There was a random hippy guy talking about “'Nam flashbacks” right before a grenade blew him up.  Trust me, it sounds better than it is.  Then the Zombie Squad guy grenaded a tree so he could drive through it and Starkwell walked out.  The rest is just stuff that Lovelock muttered to himself.
[...]
Lovelock: Worst graffiti ever.  “The Master Dude!”  What does that even mean?
[...]
Lovelock: Reverend Sunglasses looks like Gilbert Godfrey, but sounds like an asshole.
[...]
Lovelock: STARKWELL!  YOU’RE MISSING A MELTING ZOMBIE! MELTING!
[...]
Lovelock: You’re going down Doctor Trucker Hat.
[...]
Lovelock: Why would you open that door? Oh snap, zombie hands!  Guitar solo!
[...]
Lovelock: I think that cage is made of paper.
[...]
I don’t think Lovelock appreciated the twist ending, since he just stood up and said “Dumb.”  He liked the gore effects overall, but Bookwalter definitely bit off more than he could chew, and the result is a patchy film that lacks cohesion.  Impressive nonetheless.  Lovelock gives him credit for trying.  Starkwell was glad he bailed when he did.  The songs that play during the ending credits are totally insane.  And I thought only Burt Reynolds movies had awesome theme songs.
Documented by Kev D. and Posted at 19:30