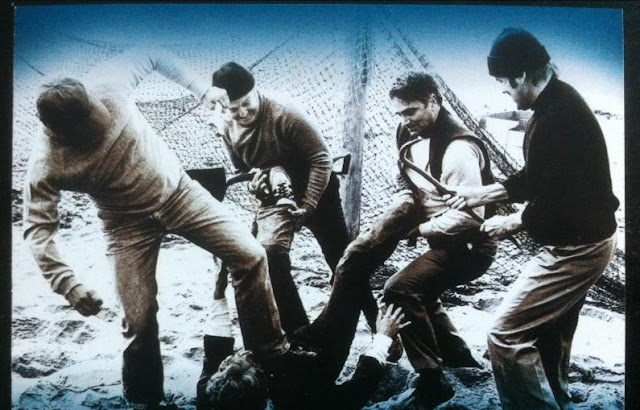 Sometimes it’s good to throw a different one into the mix.  Supposedly a little more along the lines of “Les Raisins de la Mort” or Romero’s “The Crazies”, 1981’s “Dead & Buried” is that age old tale of a town gone insane.  Directed by some dude named Gary Sherman, this one is perhaps more known for being partially written by legendary screenwriter Dan O’Bannon.  Yeah, the dude that wrote Alien!  This is another beautiful Blue Underground print.

[Soft piano intro, black and white stills, and a photographer strolling on the beach.]

Lovelock: Did we put the right DVD in?  This looks like it could be the intro for “Terms of Endearment”…

Starkwell: Does everything have to start with ‘splosions and bloody murder with you?

Lovelock: HOLY SHIT SHOVEL TO THE HEAD BURNED AT THE STAKE.

For the next ten minutes or so, both Starkwell and Lovelock kept repeating “Welcome to Potters Bluff.”  It was almost as creepy as the opening scene.

Starkwell: I would think that being both the paramedic and the mortician would be a conflict of interests…

Lovelock: When life gives him lemons, he makes lemonades.

Starkwell: Was it really necessary to put the needle into his eyeball?

Lovelock: Are you for real?  That's like asking if boobies are necessary.  I think that when life shows you lemonades, you call it lemons.

Lovelock: That’s why I never stop and ask for directions.

Lovelock: That’s also why I don’t go wandering into the dark basement of a creepy abandoned house in the middle of the night in a small creepy town.

Starkwell: Should anyone really need a reason not to do that?

As the madness progressed forward, the Sheriff continued to investigate the murders, and the insane reality started unearthing itself, Starkwell said that this only reaffirms O’Bannon’s greatness.  Lovelock said “Welcome to Potters Bluff” at least six or seven more times, often at random.

[Doc gets acid shot up his nose and his face melts from the inside.]

Lovelock: Alright, so deaths will now be rated from one to “acid up the nose”.

Lovelock: No, just for the duration of this movie.  Afterwards, we will resume our rating system that goes from one to “face eaten by tarantulas”.

[The truth is revealed, and I think the Sheriff’s brain full exploded.]

Lovelock: So it’s kind of like “The Truman Show”.

Starkwell: Are you just saying titles at random?

As the Sheriff tries to locate and bury his dead wife, and the Mortician makes himself up like a cheap whore and embalms himself, Starkwell and Lovelock just sat quietly watching the film wrap itself up neatly, blissfully mesmerized by the unique brand of incredible blazing into their wide open eyeballs at seventy-five miles per amazing.  Welcome, to Potters Bluff.
Documented by Kev D. and Posted at 07:30