Day of the Dead: The Need to Feed. 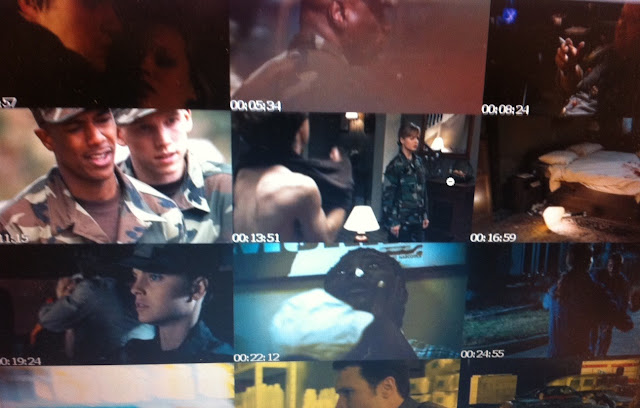 Hot off the heels of the popular “Dawn of the Dead” remake, someone set out to remake “Day of the Dead”.  Steve Miner, the film’s director, is no rookie to the horror genre, with some impressive titles on his resume, most notably, a Lovelock and Starkwell favourite, 1986’s “House”.  They certainly aren’t shy to name drop Romero all over the box, even though he had nothing to do with the film other than make a good movie twenty-five years ago.  The fact that this 2008 version went straight to video is already not a very good sign.  Did I mention that it stars Nick Cannon?  Let’s see what happens.

[Teenager coughs up snot, resumes making out with girl.]

Lovelock: I think her standards are a little low.

Starkwell: So that’s why she started turning down those "American Pie" movies, to pursue a more serious acting career…

They developed the characters a little more, but who really cares?  All Lovelock and Starkwell were able to do was make fun of Nick Cannon’s crusty little moustache, his ‘crustache’ if you will.  At one point Lovelock begged the question “Seriously, how old is he supposed to be?  He looks twelve”, to which Starkwell responded “Mena Suvari’s haircut makes her look like a ‘tween.”  Afterwards Lovelock made fun of Starkwell for discussing haircuts and using the word ‘tween.  And they missed a whole chunk of movie.  They didn’t miss much, and they are yet to see anyone that they really want to root for.  But then, as if by magic, people started turning into zombies and instantaneously decaying and running and eating people, so Lovelock and Starkwell decided to pay more attention.

[Fast zombies leap tall buildings in a single bound and throw grown men around like footballs.]

Lovelock: So when they say remake, they mean it more like… ?

Starkwell got up and started wondering how anyone could actually get away with just a bite wound when the zombies seem to “tear through people like the Tasmanian Devil on speed”.  Also, why did the virus suddenly kick in at the same time for every infected person in town?  Why does it work faster on some than on others?  Why do some peoples’ faces immediately decompose when others do not?  Lovelock shushed him, but then was like, “Seriously though, what the fuck?”  So many questions.

Lovelock: I thought you said that a good movie should have consistency?

[Suvari is being attacked.]

Starkwell: So the zombies have super powers unless they are going after the main character?

[Main character runs over her Mom without blinking.]

Starkwell: Wait, so she doesn’t want to kill the other soldier yet, in case there's a cure or something... but she felt it was ok to explode her mom into a bajillion pieces with her Hummer?  Right in front of her little brother?

Lovelock: UNIT. CORE. GOD. COUNTRY.  Somewhere after all of that, MOM.

[They find out the truth about Project Wildfire.]

Lovelock: Why is it whenever a character in a movie wants to kill some sleazeball, someone else says “no it’s not worth it.”

Starkwell: I wish someone had said that to us that before we put the DVD in.

[The outbreak has been thwarted… or has it?]

Military types, horny teenagers, the sleazy guy, the edgy radio host, one-liners, slow-motion deaths, whizzy bullets and ‘splosions.  This was basically a cookie cutter zombie/action/shit film, which just makes the use of the title even more offensive, since Romero’s 1985 epic was anything but.  Miner did a decent job directing, but when you’re handed a terrible screenplay, there’s only so much you can do.  Well, he could have just said NO.  He should have said no.  Both Lovelock and Starkwell agree that they would hate the movie slightly less if it didn’t call itself “Day of the Dead”, but they would still, nonetheless, hate it.
Documented by Kev D. and Posted at 08:00