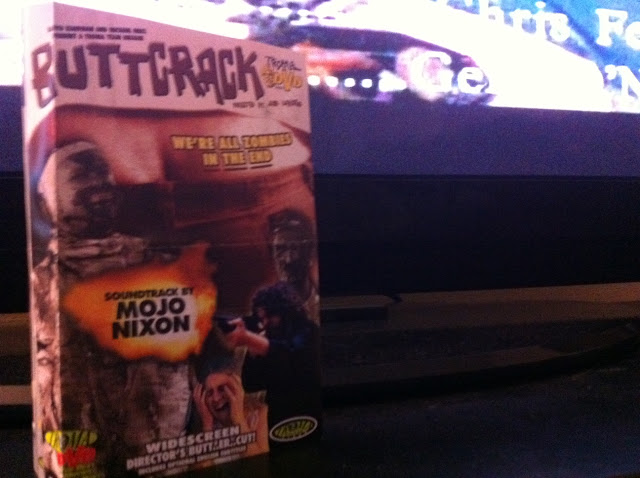 I tried to protect Lovelock and Starkwell from Troma as long as I could, but the time has finally come to expose them to that special brand of beast, the Troma film.  And what a way to introduce them to it!  1998’s Buttcrack, by one-time-only writer-director Jim Larsen!  On the plus side, the film features one of my favorite rockers of all time, Mojo Nixon.  On the down side, this will likely not help the movie much, and may only succeed in tarnishing my opinion of him, like when I found out Beck was into Scientology, or that Prince was completely insane.  The DVD starts with that signature Troma intro that makes me a little queasy, and we get this show on the road.  Scratch that, we have not yet gotten it on to the proverbial road, as Lloyd Kaufman has decided to come on and introduce the movie, and talk forever.
[...]
[Guy in loudest shirt ever wants to propose to his girlfriend.]
Starkwell: You might want to change that shirt before you propose.
Lovelock: I don’t know.  If she says yes to that shirt, then you know she’s in for the long haul.
[...]
[Fat roommate keeps interrupting their evening.]
Lovelock: What was his plan… have sex on the couch with the roommate playing Atari in the background, and then propose?
Starkwell: I think guys that dress like that don’t make good plans, in general.
[...]
At first the random nonsensical songs that the fat guy Wade would burst into were pissing Starkwell and Lovelock off.  But about ten minutes in, they couldn’t get enough of him and his singing, and even started repeating what he was singing... And his t-shirts are out of control.  He might be the only good thing in the movie so far, except for random Mojo songs periodically playing in the background.
[...]
Lovelock: I think they found the cast waiting in line at the DMV.
Starkwell: Where?
Lovelock: Somewhere awful.  Somewhere where they don't have good movies.  Somewhere where people hate movies.  Somewhere where people hate life.
[...]
[Wade interrupts again.]
Starkwell: Who pukes from looking at a butt crack?
Lovelock: The type of woman who falls in love with dudes that look like the least popular kids at Degrassi.
Starkwell: I kind of agree with what Wade has to say.  Brian sucks.
Lovelock: Seriously, the whole movie should just be Wade making fun of people for being “pervoes”.
[Wade dies.]
Lovelock: Well, there goes that idea.
[...]
Mojo does a decent job playing an insane preacher, but it’s not enough to stop Starkwell and Lovelock from hoping for a power failure. I should probably mention that nothing has happened, and there is no sign that anything will happen.
[...]
[Characters feel guilty, for one second, but then start basically saying that they’re glad he’s dead and dance.]
Starkwell: The director might have been smart to cover up her acne before going in for the extreme close-up. Or, don’t use a close-up.
Lovelock: Maybe he’s trying to symbolize that she isn’t perfect.
Starkwell: Yeah well, we can see that from far away.
[...]
After the fourth or fifth time that the film faded to black between scenes, Starkwell started to wonder if those were meant to be commercial breaks.  Lovelock then said that he could “go for a commercial break.”  Starkwell agreed, adding that “most Folgers commercials have better stories.”
[...]
[Preacher marries the two main characters and they “get the party goin’”.  With a boombox.]
Starkwell: They’re all dancing to a different rythym.
Lovelock: It’s the late nineties and he still is listening to cassette tapes.
Starkwell: Where would he even get tapes?
Lovelock: The same place he gets his clothes.
Starkwell: The same place Wade go his Atari.
[...]
Starkwell and Lovelock weren’t paying much attention anymore, but kept repeating the line “CHURN THE MILK AND MAKE IT BUTTER.”  They seem happy that Wade is back.  But it was short lived and they got bored very fast again.  Lovelock perked up because of a sweet shovel smack to Wade's head, but that too, was short lived.  The bad news is that there is only fifteen minutes left, and there isn’t a zombie in sight.  The good news is that there is only fifteen minutes left.
[...]
[TWIST ENDING.]
Starkwell: Why would a grown man visit a graveyard with his old parents?
Lovelock: Hopefully to get killed.
Starkwell: Oh look! Bloopers during the credits!  Just like a real movie!
[...]
Thank you, Troma, for another piece of shit.  Fuck this movie.  Shame on you, Mojo.  Considering that you once referenced “Vanishing Point” in a song, I would have thought you would have had the sense to not be in this.  On the bright side, the film’s special features include a live performance by Mojo, which, as Lovelock said, “is worth at least one dollar out of the TOO MANY dollars that this thing cost.”
Documented by Kev D. and Posted at 16:25