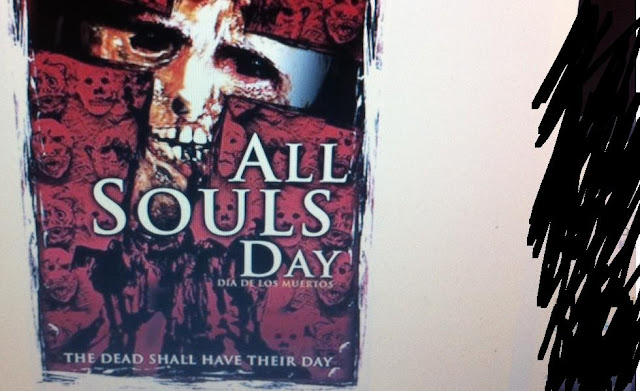 Another in a string of “made for Sci-Fi” channel movies, this one is supposed to be the cream of the crop.  That is, of course, if the cream is the worst part, and the crop is actually a bag of shit.  The DVD opens with a trailer for “Near Dark” which looks awesome and stars Bill Paxton.  But we’re not about to watch that.  We’re about to watch something whose claim to fame is that Danny Trejo is in it.  Starkwell and Lovelock are less than excited for this 2005 romp in Mexico penned by the guy who wrote Uwe Boll’s “House of the Dead”.  So yeah.
[...]
[Anytown Mexico.]
Starkwell: For a random Mexican village, there is an awful lot of English being spoken.
Lovelock: They did the same thing in “Hunt for Red October”, except with Russian.
Starkwell: And why are all of the villagers white?
Lovelock: What did you expect them to do, go and grab a truck full of day laborers?
Starkwell: Dude...
Lovelock: You know what? They probably would give a more convincing performance.
[...]
[White family in the 50s is murdered by village of Mexican Zombies, cuts to present day.  Lame white people run into village.]
Starkwell: Why did they need to show the flashback?  How did that girl write that whole explanation in the sand with a stick?  Why aren’t they panicking more?  Why are we watching this?
Lovelock: The answer to all of those is, because this film is a turd.
[...]
[Lame white guy invites his friends to join them, and then makes sex all over his girlfriend.]
Starkwell: Why would they invite people after finding a girl with her tongue cut out?  How could they be horny under these circumstances?  Who puts their bra back on immediately after boning like that?
Lovelock: Once again, because this film is a turd.
[...]
Altman throws in movie references, but rather than being subtle about it, the characters always find a way to explain what movie they were referencing immediately after referencing it, making it THOROUGHLY LAME.
[...]
[Zombie mayhem continues.]
Starkwell: If he wants to go get more bullets, why is she wasting them by shooting bullets in the air? Why is tongueless a zombie already?  How is she screaming? Why didn’t they kill the Sheriff? If the Sheriff is the kid from the flashback, why isn’t seventy years old?  Why is it only the Mexican girl that sees the weird apparitions?  Why are they making jokes?  Why are they making out?!?!?!  Why does the cheerleader have super powers?!?!?  Why am I still sitting here?
Lovelock: Turd! Remember? … Starkwell?  Starkwell?
[...]
Starkwell left.  Lovelock stayed.  As usual, here are some bits from Lovelock’s conversation with himself.
[...]
[Trejo shoots his son in the head, accidentally.]
Lovelock: How could he have possibly missed his mark by that much?  Why do we need to see Trejo masturbating? Why is she puking black stuff? Why would they have killed the other people in the first place if they only wanted to get the Vargas guy? Why is she magic, but not magic enough to stop this shit from happening in the first place? What the fuck?
[...]
Once Lovelock remembered the answer to all of these questions, he got quiet.  Real quiet.
Documented by Kev D. and Posted at 21:40